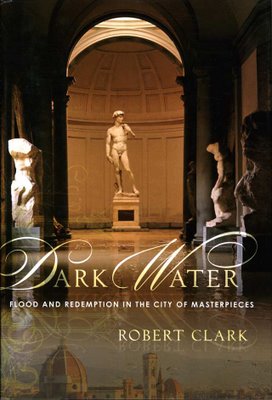 Last summer, while walking home from the University of Iowa Main Library very late in the evening, I came to a stop in front of a large truck parked in front of the Museum of Art. I stood and watched as workers and museum guards struggled to manuever a very large crate into the building–a crate that looked to be the exact size of Pollock’s Mural.. The flood was coming and the museum staff was frantically trying to get the entire university’s collection to safety. This meant not only removing the artwork from flood danger, but also going forth with a complex evacuation plan that involved secretly moving the artwork out in the middle of the night and transferring it to a secure location. Working around the clock, it still took about four days to save the Museum’s artwork (now on display at the Figge Art Museum).

In Dark Water: Flood and Redemption in the City of Masterpieces, Robert Clark tells the story of the devastating flood that hit Florence, Italy on November 4, 1966. With almost no warning, the Arno River rose into the city in the early morning hours–giving the Florentines no time to save their families, their homes nor their city full of art. As soon as photos of the destruction began to surface, volunteers from around the world (nicknamed “mud angels”) rushed to Italy to help save the priceless paintings, manuscripts and architecture from the deluge of water and mud. Clark does an amazing job describing the incredible efforts to save the treasures of Florence, including works by Leonardo da Vinci, Michelangelo, and Botticelli, but also the lack of attention given to the actual people affected by the flood. While the world pumped money into conservation efforts, the Florentines spent weeks without food, water, and electricity bringing to light difficult ethical questions of history vs. present vs. posterity.

As one of the most enjoyable nonfiction books I have ever read, I found Dark Water both fascinating and emotional with a great combination of art, history and personal stories to which we in flood country can sympathize. This is a must read for all those who enjoy art or have ever visited the amazing city of Florence.

Those who are interested might also went to watch Restoration of Books, Florence 1968, a 40 min. documentary currently viewable online from the University of Utah.