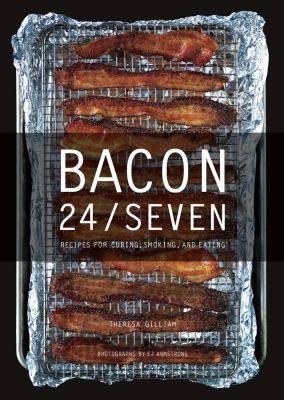 Even as pork prices rise and the economy fluctuates, consumption of bacon remains steady. The American Meat Institute reports that bacon has an almost cult-like following; the Facebook page About Bacon has more than 10 million Likes. Its sublime savory taste has been endorsed by scientists as well: bacon boasts umami, the seductive “fifth taste” that heightens and rises beyond sweet, sour, bitter, and salty. Bacon isn’t just an infatuation–it’s a way of life.

In Bacon 24/7, author Theresa Gilliam and photographer E Jane Armstrong have teamed up to create a fun and current cookbook to feed the need for bacon. They include recipes for every hour, from dawn through dark, as well as info on topics such as how to cure and smoke your own bacon. Drool-worthy photographs highlight dishes such as Pasta Carbonara, Pork Belly Hash with Kale and Sweet Potatoes, and Apple Pie with Bacon Strudel.

Any evening that begins with a Bacon-Infused Manhattan holds the promise of being an unforgettable night. (description from publisher)