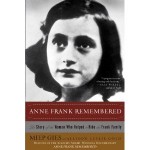 The book begins with Miep’s own desperate childhood in Vienna during World War I and how she was sent to the Netherlands with many other Viennesse children in order to live with families who could temporarily take care of them.  Years later, Miep decides to stay in Amsterdam after accepting a secretarial job with a company who produced kits so women could make jellies and jams from the comfort of their home – her new boss was a man named Otto Frank.  Her recollections of meeting his family, especially Anne, are charming and the long friendship she shared with the Frank family is vividly recalled.

The book follows the progression of World War II and the eventual occupation of the Netherlands.  Even though this story is one that has been written about frequently, Miep’s first hand account of the lives of the Frank’s and their friends is an invaluable historical story.  The co-author, Alison Leslie Gold, wanted to capture Ms. Gies and her husband’s own thoughts and remembrances – the first edition of the book was published when Ms. Gies was nearly 80 years old.  She died this past January at the age of 100.

Bad Behavior has blocked 1354 access attempts in the last 7 days.