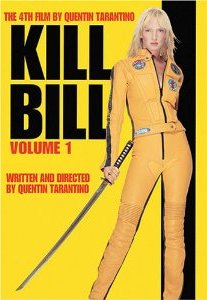 One of my very favorite directors is Quentin Tarantino.  I think his movies are so original and witty, all while being filled with crazy action scenes.  I can’t think of one of his movies that I’ve seen and not liked.  Of course Pulp Fiction and Reservoir Dogs are two of his most well-known films and are both fantastic.  But for me, in the race for favorite Tarantino film, it’s a tie between two of his most recent works.  The first is the Kill Bill saga, comprised of Kill Bill: Volume 1 and Kill Bill: Volume 2.  It’s the story of a former assassain who tries to quit the business and is hunted down by her former boss and his minions on her wedding day.  She survives the attack, and now she’s out for revenge.  Volume 1 is pretty heavy on the beautifully directed (and fairly bloody) action scenes, while Volume 2 focuses more on the backstory and Tarantino’s signature dialogue. 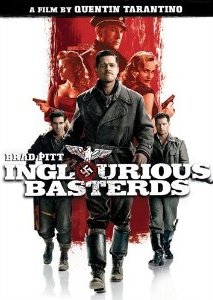 My other favorite is Inglourious Basterds, the fictionalized World War II story about a group of Jewish-American soldiers banding together to bring down as many Nazis as possible.  This movie surprised me in so many ways.  I have to admit, I’ve always thought of Brad Pitt as just a pretty face rather than a great actor, but he’s absolutely hilarious and perfect in his role as Lt. Aldo Raine, the leader of the rogue team of Nazi hunters called The Basterds.  But the best performance in this movie is Christoph Waltz as Hans Landa, a member of the Nazi high command obsessed with tracking down any Jewish person who might have escaped initial searches.  I think I held my breath during the entire first scene of the movie because his performance was so riveting.  Even though I have to turn my head away from the screen every now and then (after all, it’s a Tarantino film, and bloody violence is bound to happen), I loved every  minute of the film:  the intense drama, the hilarious dialogue, and the inspired performances.  I highly recommend it.