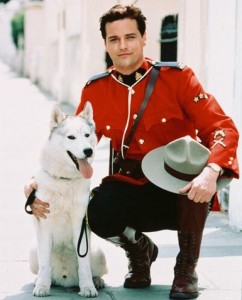 Due South is one of the few prime time Canadian series to air on American tv. The cultural differences between Canada and the U.S.  in general, and the Mounties and Chicago police in particular, were a major theme. The Canadian law enforcement officer is politeness personified, while the American is well-armed and cynical.

The tone was gently absurdist. That, and the fact that it bounced all over the schedule,  led to it’s cancellation. Fortunately, though, like so many other under-rated shows, it is available on DVD through our very own PrairieCat.

Especially charming,  was that the star’s vast knowledge of just about everything was attributed to the fact that his grandparents were librarians. You gotta love that.

What’s a modern-day Olympics without mascots?

Well, definitely still exciting but perhaps a little less fun.  If you were able to watch any of the opening ceremony for the Vancouver Winter Olympics, the emphasis on the traditional “First Nations” was obvious.  The media and marketing moguls have carried it a bit further by designing some cute, cuddly little mascots inspired by native creatures.  Here’s a few to look for:

If you go to the official website you and your kids can play games with Quatchi and the other mascots.  I don’t know about you, but it’s probably the closest I’ll ever get to competing in the Olympics!