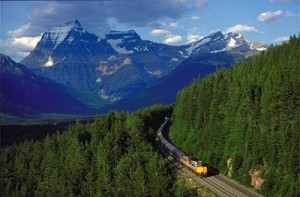 The Edge by Dick Francis is, as always, about horses, but this time the action takes place in Canada, instead of England.

Head of Security for the British Jockey Club, Tor Kelsey  travels to Canada for the Great Transcontinental Mystery  Race  Train. He works  undercover  as a waiter on the train so he can keep an eye one of the club’s Most Wanted  (an extortionist/horse owner they haven’t been able to catch red-handed,yet).

To add to the intrigue, there is a murder mystery group on the train – no one but Tor and his foe know that there is a real murderer on board.

Another railroad mystery is The Silk Train Murder by Sharon Rowse. A train that rushes silk from Vancouver to the east coast of Canada is the setting for a turn of the century romantic caper. Emily Turner is the liberated heroine who helps John Landsdowne Granville investigate a murder. Granville’s quest takes him to the seedier part of frontier towns (opium dens, brothels and dance halls).

The combination of strict Victorian morals and the rambunctious frontier provide a glimpse into a fascinating period of Canadian history.