Many of us don’t often think about how everyday objects came to be: washing machines, zippers, fire escapes, even the board games we play. But behind them all is a person with an idea.

Davenport citizens have been responsible for a startling number of those ideas over the years. The Iowa Inventions Database lists 5,412 patents in Scott County between 1843 and 2009, 4,103 of them in Davenport alone. And it’s useful to keep in mind that these are only inventions that have been patented. Obtaining a patent is usually a long and expensive process involving attorney fees, so our information is limited to those with the financial means to file for one.

Some of the following inventions created by Davenport residents are imperative to safety, some are strange, and all are useful. 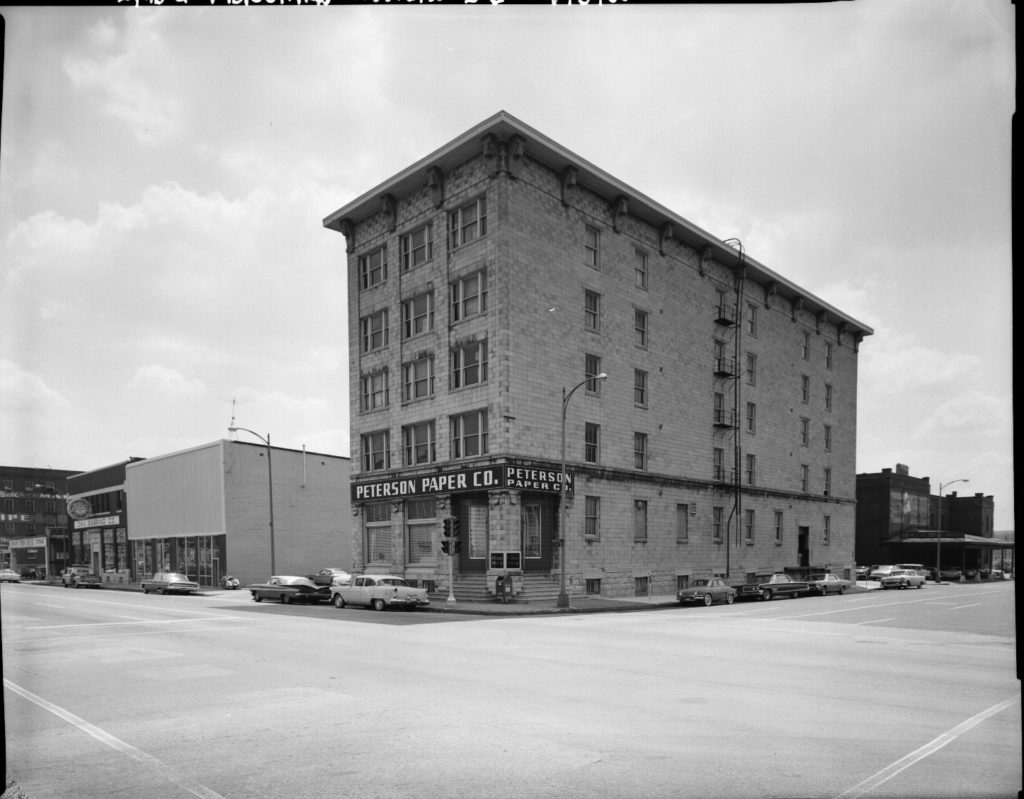 Photograph of the Peterson Paper Co. from the Richardson-Sloane Special Collection Center Collections.

Fires were common in the 19th century, so much that the Peterson Paper Company was constructed to be “fire-proof.” The following Davenport inventors were attempting to improve the safety of fire escapes for their fellow citizens. 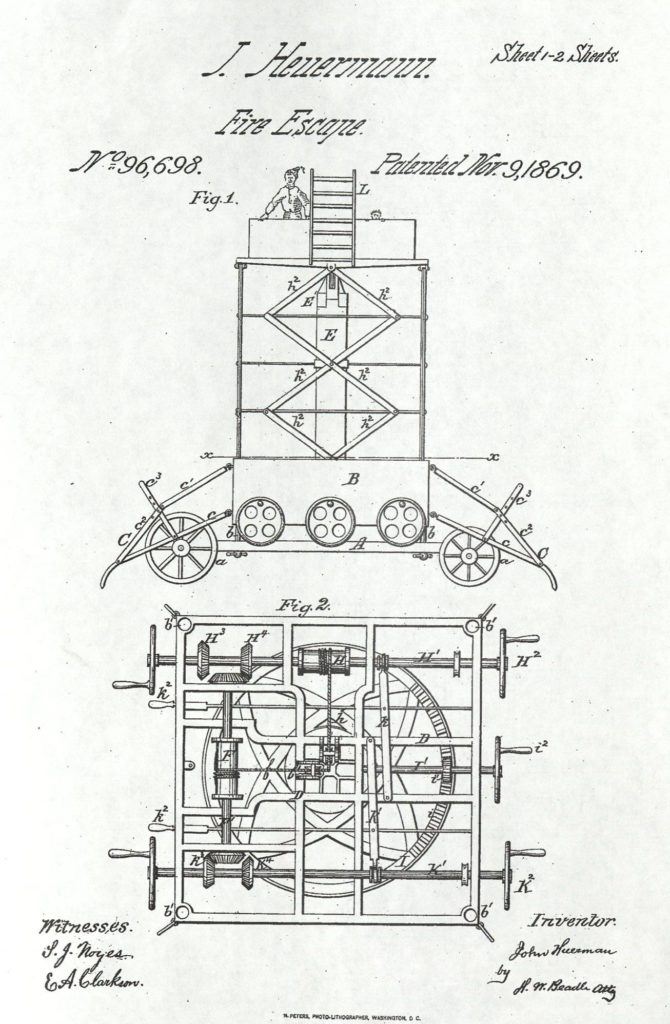 John Heuermann’s 1869 patent for a fire escape that could be wheeled to the aid of those needing rescue. Wheeled fire escapes existed at the time, but Heuermann claimed his to be more stable so that the escape would “stand plumb.” 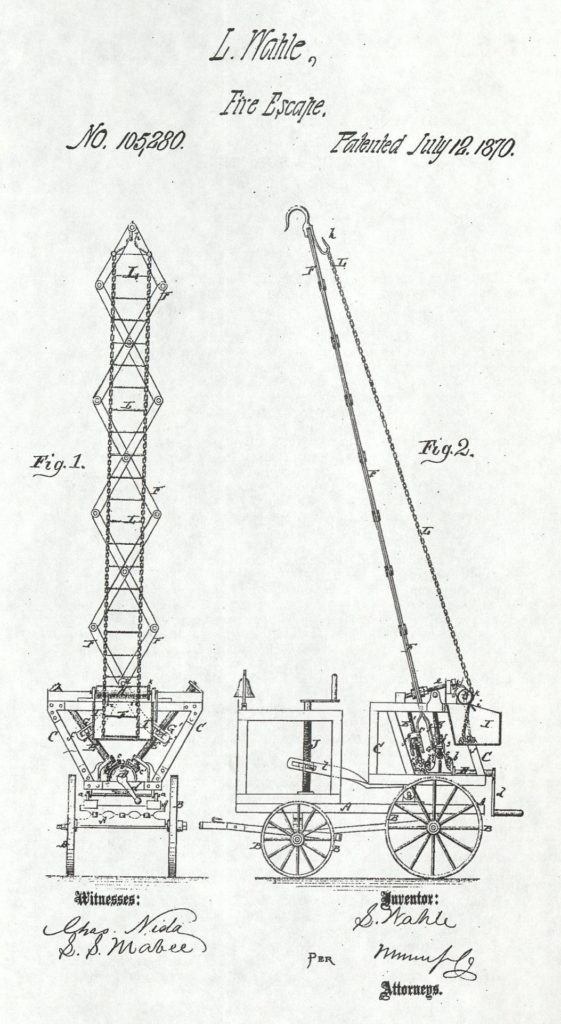 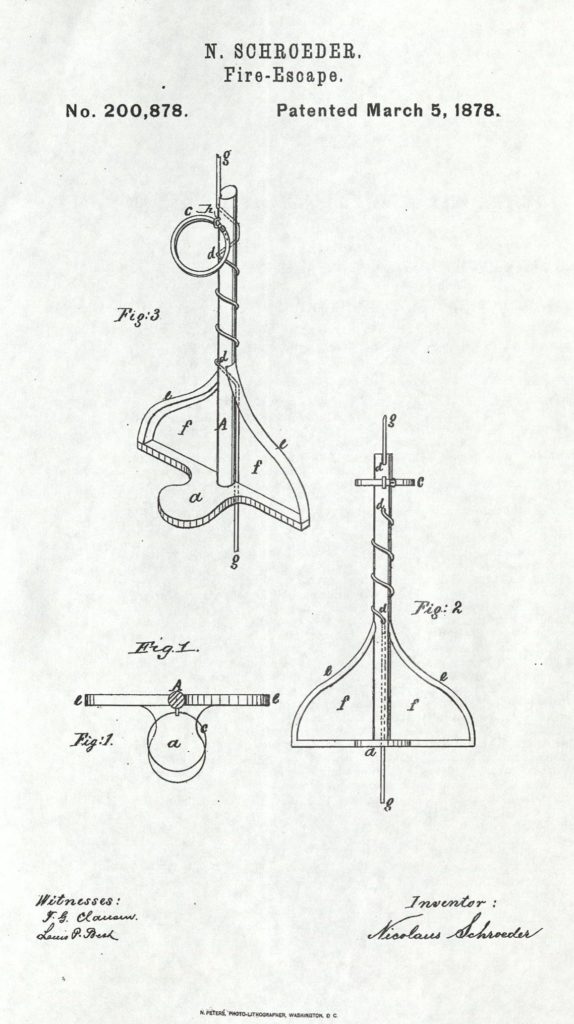 In 1878, a patent was granted to Nicholaus Schroeder for improvements on this type fire escape, which allowed people to attach to an object in the room by way of a rope and lower themselves to safety on this seat. In the patents, Schroeder claims that the novelty of his invention lies in the stability of its construction. 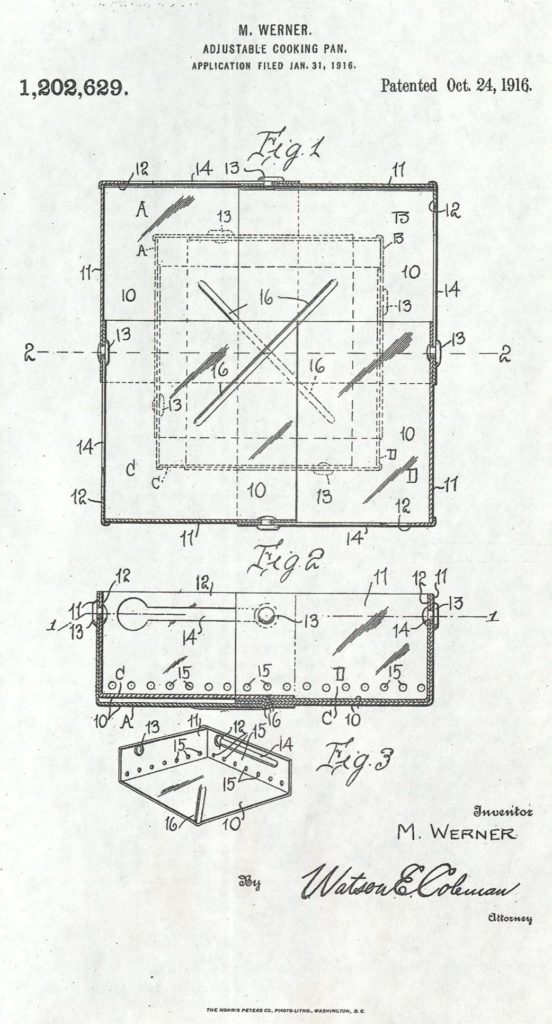 Other inventions improved the design of everyday objects. Minnie Werner, a housewife, patented this adjustable cooking pan in 1916. It was made to prevent the dressing from getting soggy and could be placed in the oven directly in the juices from the meat. You could also adjust it to create a cake of many sizes. For cleaning, it could be easily disassembled and flattened for convenient storage. 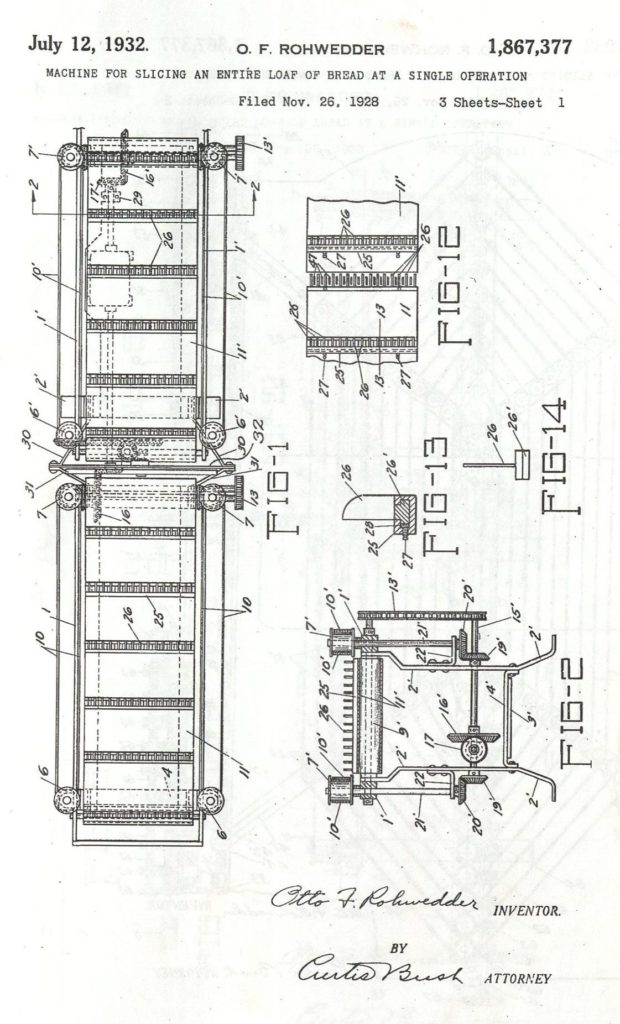 The Quad Cities is famous for the invention of sliced bread. You may know that Davenport’s Otto Rohwedder invented the bread slicer, but his idea sparked a succession of improvements and alternate versions by local inventors, including Harry J. Criner (1933), Arthur A. Kottman (1934), William E. Bettendorf (1934), Taylor Creech (1936), and Charles H. Petskeyes (1947). 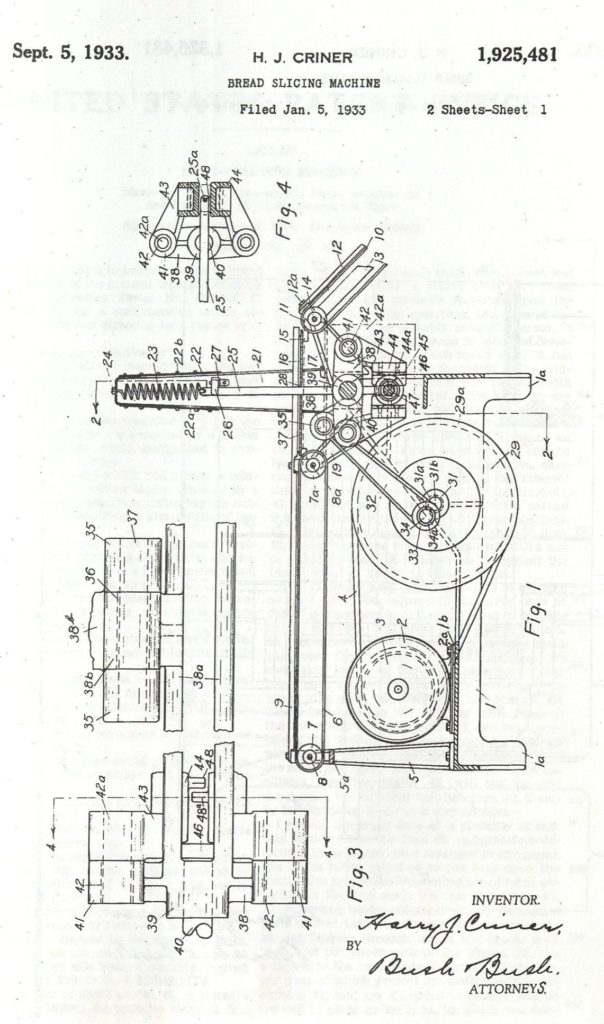 While Rohwedder’s invention featured slicing bands, Criner’s introduced blades to improve the uniformness of the slices. 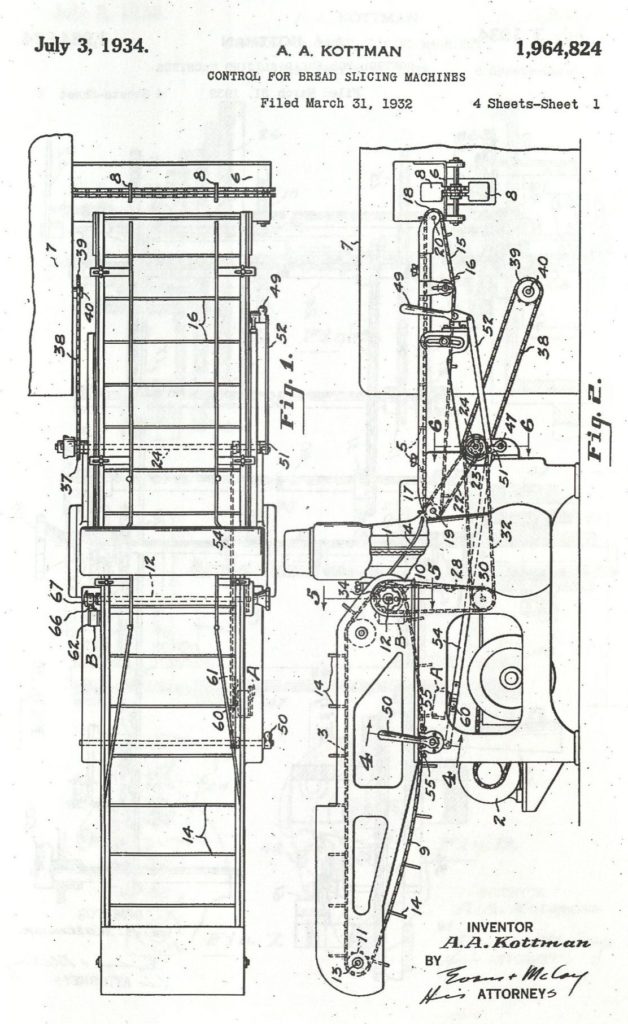 Getting the conveyor belt and the blades to act in concert with each other was a challenge for inventors. Kottman’s control for these machines only allowed the conveyor to run if the blades were working at their intended speed. 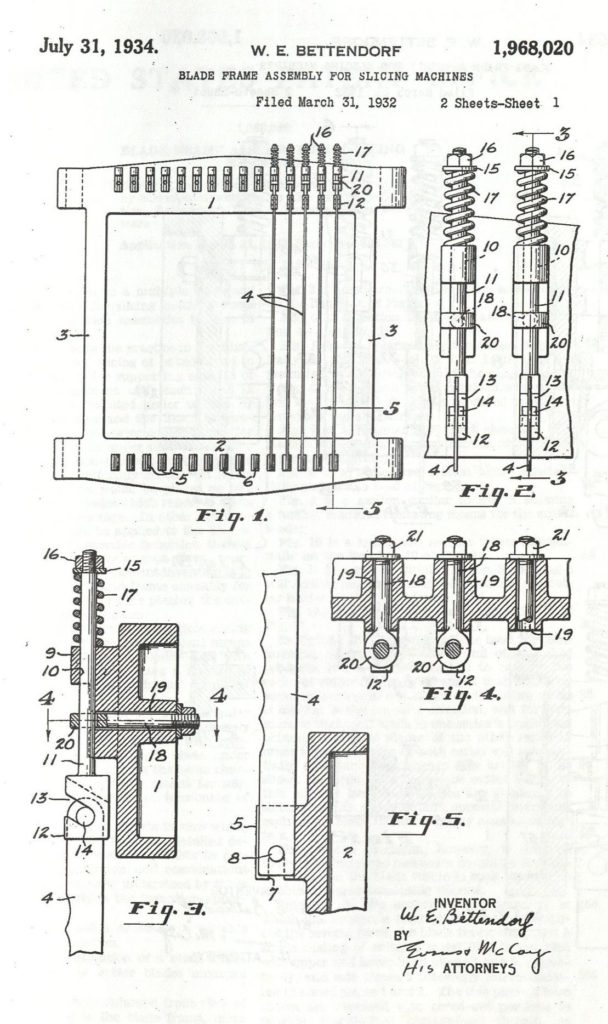 William Bettendorf’s blade frame assembly fixed the problem of differing blade tension, which often resulted in a wavy slice,by incorporating nuts and bolts that allowed operators to adjust the tension by small degrees. 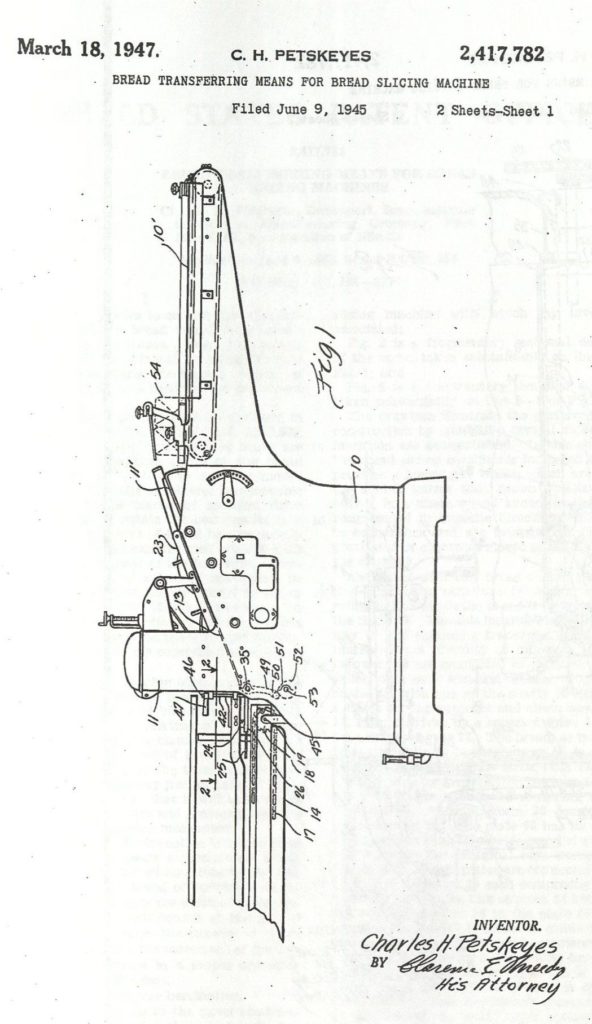 Petskeyes’ bread transferring means employed “follower bars” on a chute to hold loaves of bread steady as they traveled through the conveyor. 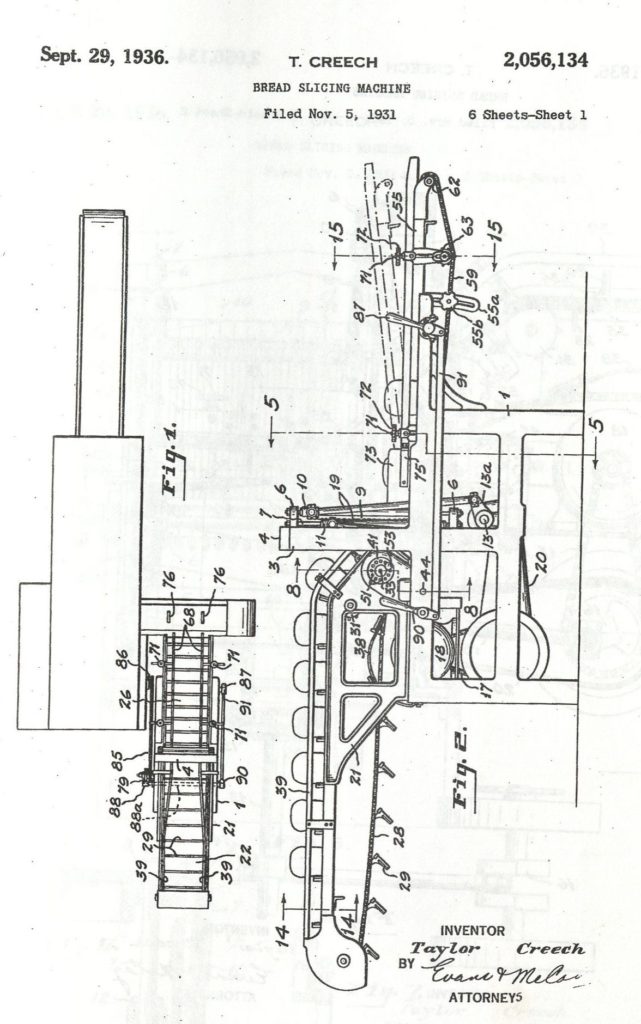 Since timing and position was everything when it came to bread slicers, Creech invented a machine that improved these in some of these ways: by arranging the conveyor and feed table to “cushion” the bread while it travels through the blades, ensuring uniform slices; by feeding the bread to the blades at an angle to  “prevent crushing”; and by the use of a mechanism that held the slices together before they were wrapped to ensure that the loaf would not be crushed or fall apart.

You may recognize the Clapp surname from this blog about Lottie Clapp, the first female funeral director in the tri-state area. Her son, Alan, only owned the funeral home for a short while after his mother’s death; however, he did contribute to inventions in the funeral industry. 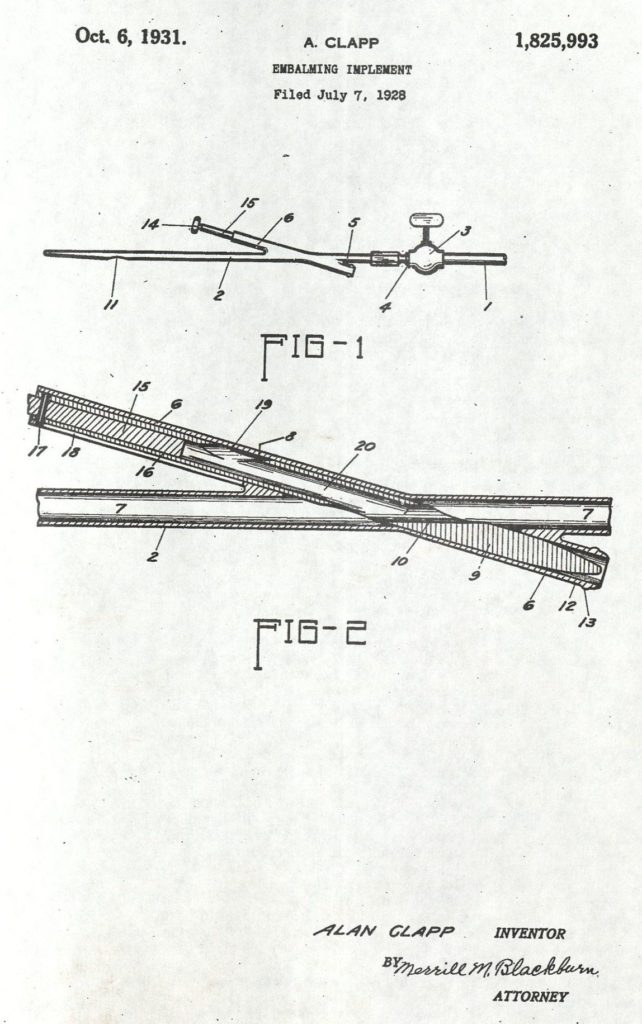 His patent for a multi-directional embalming tool would “do away with the necessity of removing the instrument from an artery and then turning it end for end.” 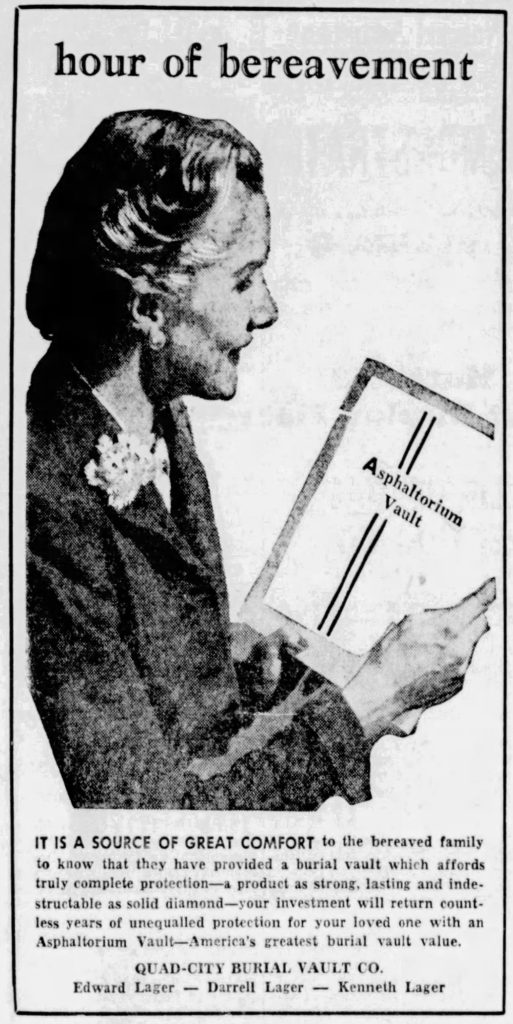 Much later, in the 1950s, Edward J. Lager invented a burial vault that claimed to prevent decay. This is just one of the examples of funeral industry scams that were brought to light with the 1963 publication of Jessica Mitford’s The American Way of Death. 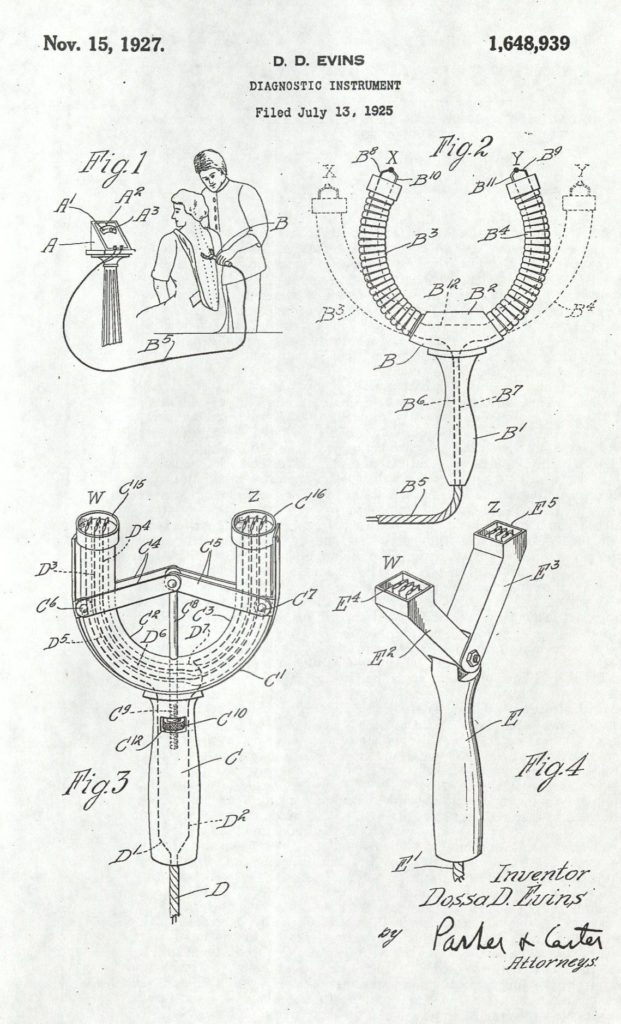 Some inventions, however, were extremely useful to their industries. Although his most famous invention was the neurocalometer, a device for detecting changes in temperature along the spine, Dossa Dixon Evins invented several chiropractic implements during his life, including an adjusting table and a method of creating x-rays.

There are many, many more local inventions where these came from. If you’re interested, visit the Iowa Inventor’s Database.

Bad Behavior has blocked 547 access attempts in the last 7 days.