This past Wednesday evening at the Eastern Avenue branch of the Davenport Public Library, a direct descendant of the Lakota leader Crazy Horse spoke about recording his family’s oral history.

Floyd Clown, grandson to Crazy Horse, was on his 146th public presentation to deliver this message: the story of his family and his famous ancestor has long been misrepresented by others; now it must come directly from members of the family itself.  This, he said, was the reason he and two of Crazy Horse’s other grandsons — Doug War Eagle and Don Red Thunder — agreed to tell the truth about their family to author William Matson and take the book Crazy Horse: The Lakota Warrior’s Life and Legacy on a worldwide tour.

“We do not like the fact that our history has been painted incorrectly by other cultures…This is one of the reasons that we need to tell our own history…We hope that by putting our oral history in print, we will help our children, grand-children, and unborn to know it, and at the same time, help other cultures to see us for who we are.” (p. 10)

A similar desire to speak for one’s own self and people was expressed nearly two centuries ago by a Native American familiar to us here in the Quad Cities: Black Hawk, or Ma-ka-tai-me-she-kia-kiak, leader of the Sacs. In his 1833 autobiography, Black Hawk included these words in his dedication to Brigadier General H. Atkinson:

“…I have determined to give my motives and reasons for my former hostilities to the whites, and to vindicate my character from misrepresentation.” (p. 7) 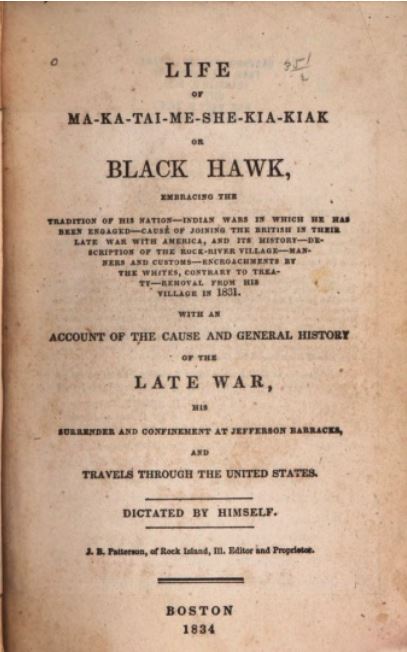 J.B. Patterson, editor of the autobiography, included a phonetic transcription of the dedication as spoken by Black Hawk in his own language: 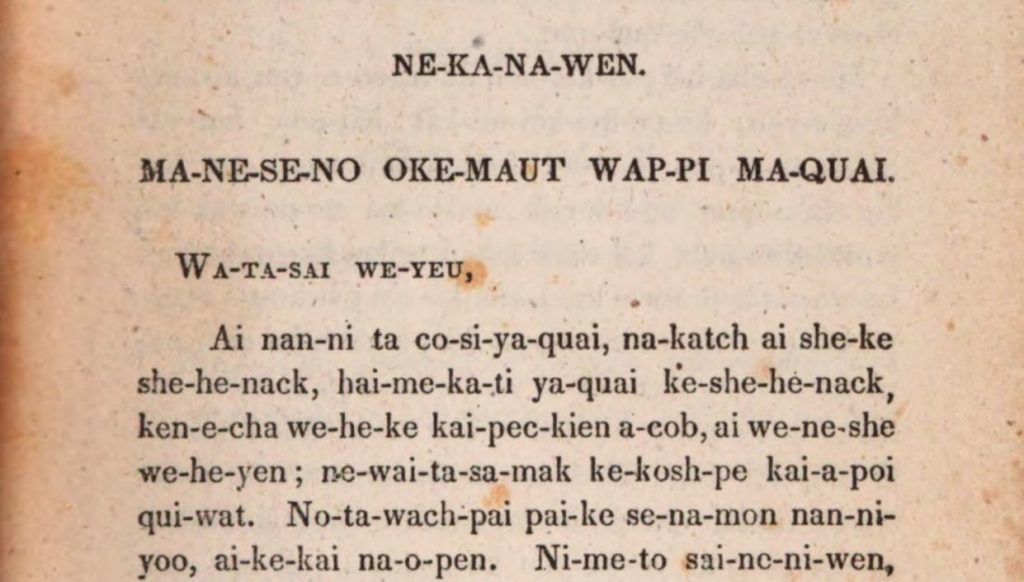 Patterson also supported Black Hawk’s wish to tell his own story in his introduction (the “Advertisement”):

“Several accounts of the late war having been published, in which he thinks justice is not done to himself or nation, he determined to make known to the world the injuries his people have received from the whites, the causes which brought on the war on the part of his nation…” (p. 9)

Black Hawk’s interpreter Antoine LeClaire, himself of Pottawottomie descent, was likewise eager to convey how much the Sac leader wanted his voice to be heard:

“…on his return to his people in August last…[Black Hawk] expressed a great desire to have a History of his Life written and published, in order (as he said) ‘that the people of the United States…might know the causes that had impelled him to act as he had done, and the principles by which he was governed.'” (p. 3)

LeClaire also vouched for the authenticity of Black Hawk’s account:

“I was particularly cautious to understand distinctly the narrative of Black Hawk throughout–and have examined the work carefully since its completion, and have no hesitation in pronouncing it strictly corrrect, in all its particulars.” (p. 3)

Just as Matson did for the Crazy Horse family:

[The family members]…supervised and had the final approval on this manuscript and would only allow it to be published if it remained unchanged.” (p. 9)

The Richardson-Sloane Special Collections Center holds two copies each of the 1882 and 1912 editions of Black Hawk’s autobiography, as well as Crazy Horse: The Lakota Warrior’s Life and Legacy. The latter may also be checked out from all three branches.