In Memoriam: Eldon Leroy Baxter of Davenport, Survivor of the Attack on Pearl Harbor

Eldon Leroy Baxter was born on August 22, 1920 in Buffalo, Scott County, Iowa, to Jesse Burton Baxter and Mable Laura Porter.  He attended the Davenport schools. As a teenager, he worked as a newspaper carrier for the Davenport Democrat, a batboy for the Davenport Blue Sox, and both a player and a coach for the W.G. Block Co. baseball team of the Davenport Park Board’s twilight league.

Mr. Baxter enlisted in the Navy on September 17, 1940 when he was twenty-one years old. He was working as a storekeeper aboard the U.S.S. West Virginia on the fateful day — December 7, 1941 — when the Japanese bombers attacked Pearl Harbor.

On December 16th , Mr. and Mrs. Baxter received a telegram from Rear Admiral C.M. Nimitz, informing them that their son had been killed in action.

Imagine the expressions of surprise and delight at 1301 Arlington Avenue, just before Christmas, when the Baxters opened this letter:

Yes, I still have my skin unpunctured.

I could probably write one of the greatest adventure books ever written if it were allowed.

I drove a truck for a little over a week, and yesterday I was called to take temporary duty on a new ship.

I am in G.S.K. which is like a hardware store, and I am working with a brand new bunch of swell storekeepers.

I (several words censored) I had except for a (one word censored), but I drew some clothing and things I needed yesterday.

Eldon Baxter returned from foreign service on October 23, 1945. He married Wilma Joyce Helbling on November 23, 1946. He was a member of the Naval Reserve and also served during the Korean War. He worked for Iowan Dairy Co., International Harvester, The Times Co., and Roederer Transfer and Storage.

Over the next 70 years, Eldon Baxter would share his firsthand account of the bombing of Pearl Harbor with other members of the Mississippi Valley chapter of the Pearl Harbor Survivors Association. 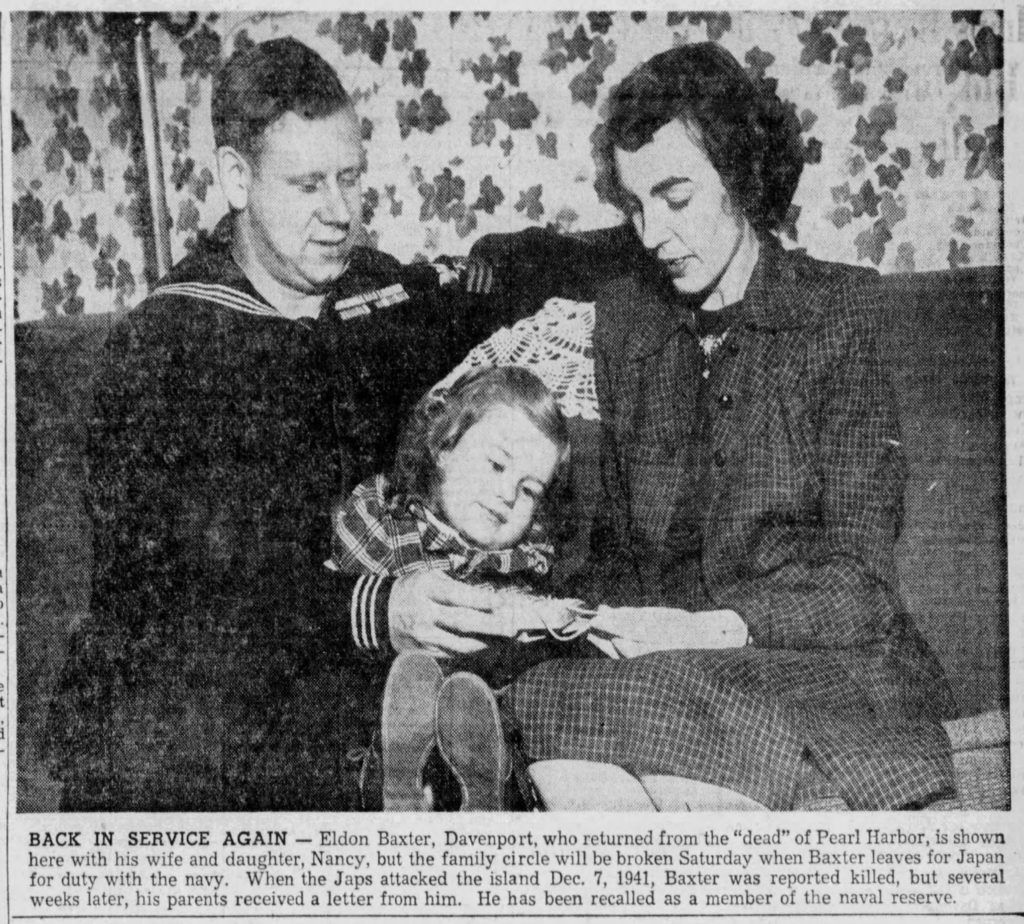 Like Loading...
This entry was posted in Local History and tagged eldon baxter, In memoriam, Pearl Harbor, veterans, WWII. Bookmark the permalink.

Bad Behavior has blocked 844 access attempts in the last 7 days.