Dudley Bell Priester was born January 18, 1923 in Davenport, Iowa to Oscar and Helen (Bell) Priester. According to the 1930 U.S. Federal Census, his father was vice-President of Priester Construction Company and his mother owned a gift shop.

The family lived at 2745 Wood Lane in the McClellan Heights neighborhood in East Davenport. Dudley attended Davenport High School and, later, Lawrenceville Prep School in New Jersey from 1939-1941, where he was captain of the wrestling team. He then went to Princeton University in the fall of 1941. 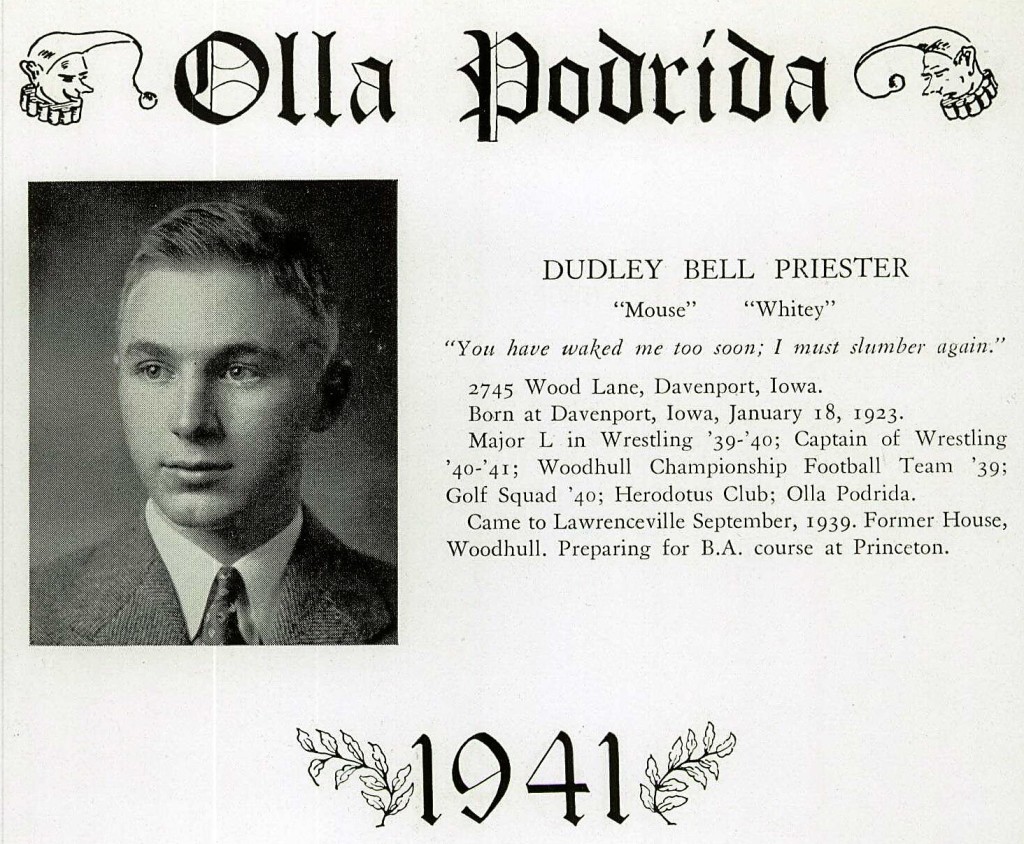 He graduated in 2 years so he could go into the Civil Engineering Corps of the Navy. He served in the 111th and 56th U.S. Naval Construction Battalions stationed in the South Pacific during WWII.

After leaving the Navy, he started working at his father’s company, Priester Construction, but his first construction job was the administration building at the Rock Island Arsenal in 1939. Priester was in charge of the construction of the Davenport Public Library building designed by architect Edward Durell Stone that was completed in 1968. He was also responsible for the Modern Woodmen of America office in Rock Island, the foundation construction at Alcoa, and many other local projects.

Priester married Jean Elizabeth Hansen in March 1947 and had 5 children: Bill, Nancy, Ted, Charlie and Mary. They lived in a mansion at 49 Hillcrest Avenue from 1954 – 2012, before downsizing to a condominium at the Carriage Club.

Priester served on the board of the Quad City Symphony Orchestra, Davenport Museum of Art, and Putnam Museum, was a member of the Master Builders of Iowa, and served as President of the Outing Club and the Town Club. He was a stamp collector and loved to wear a bow tie, preferring the Churchill (blue with white polka dots)

Like Loading...
This entry was posted in Local History and tagged Dudley Bell Priester, In memoriam, Priester Construction. Bookmark the permalink.

Bad Behavior has blocked 776 access attempts in the last 7 days.