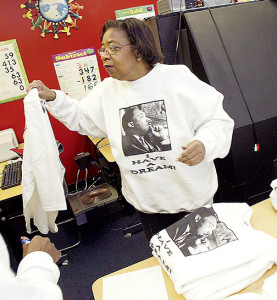 Johnson is the recipient of numerous awards before and since, including two in the past year: the 2015 Athena Award honoring local women in leadership roles, and induction into the Iowa Volunteer Hall of Fame, “the most prestigious state-level honor volunteers can receive.”

Johnson is the founder and longtime Executive Director of United Neighbors, Inc., a community-based social service organization that has enriched the lives of the city’s residents for 43 years. From an initial desire to provide a safe place for neighborhood children to play and learn, Johnson increased the ambitions of her non-profit to offer after-school and summer programs for youth, street and park beautification projects, home-buying and home-repair assistance, senior programs, and a host of other free services aimed at improving the quality of life in Davenport’s predominantly African-American neighborhoods.

Johnson’s work at United Neighbors places her squarely in the local tradition of social reform efforts headed by women, such as Annie Wittenmyer, Clarissa Cook, Maria Purdy Peck, and Phebe Sudlow. And as an African-American woman, she joins Cecile Cooper as a Davenporter dedicated to providing equal opportunities for all.  As one of her many awards states, Ida Johnson is indeed “one of Iowa’s most valued history makers,”* and we wish her continued success in realizing Dr. Martin Luther King, Jr.’s dream here in the Quad-Cities.

*Ida Johnson was honored by the African American Museum of Iowa in Cedar Rapids as a 2009 Iowa History Maker.

Bad Behavior has blocked 795 access attempts in the last 7 days.