A December Thanksgiving in Davenport, 1865

One hundred and fifty years ago this coming week, on December 7, 1865, Davenporters observed a memorable National Day of Thanksgiving. In the words of Iowa Governor William M. Stone’s proclamation, printed in the Davenport Daily Gazette on the 6th, it had so “…pleased the Divine Ruler of Nations, during the year which is drawing to a close, to deliver our Land from the horrors of Civil War and sustain us by the abundance of his mercies…” that Iowans must “assemble together in our accustomed places of public worship and give thanks to Almighty God for all His mercies and goodness so graciously vouchsafed unto us…”

The newspaper’s editor, Edward Russell, boldly asserted that “[i]n no State can the National blessings secured through the overthrow of the rebellion and the annihilation of Slavery be more sincerely appreciated than here in Iowa, ” and he continued to wax lyrical about the state whose

… patriotism throughout the war was unexcelled by that of any other State, and whose citizens have sacrificed most freely of life and treasure to secure and preserve these blessings. In no State will this Thanksgiving day be more generally observed. Nowhere else will there be more devout assemblies in village church and humble school house. From no other assemblies will the ascriptions of praise be more sincerely and earnestly offered. No homes will be more joyous that those of Iowa in which the long absent braves now re-unite around the family board…

Perhaps Iowa was indeed exceptional in celebrating Thanksgiving. A few days later, on December 11th, Russell reported that cold weather had kept many Rock Islanders from assembling on the appointed day. In contrast to Davenport’s  “sister city” in Illinois, he wrote, “[t]he ‘severe cold’ wasn’t discovered on this side of the river, and our churches were very largely attended. Our mills, factories, &c. suspended operations, the stores were closed, fireside circles were well filled, and the day heartily observed.” Early evidence of the practice of defining the cities on the two sides of the Mississippi against each other?

And as is also the case today, holiday shopping was encouraged immediately following Thanksgiving. Advertisements such as these appeared in the Gazette in the early days of December: 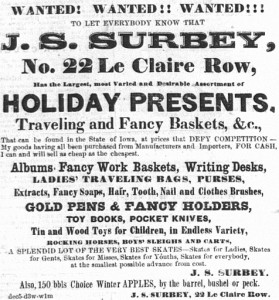 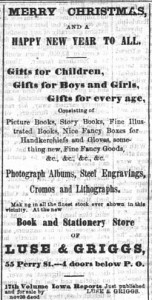 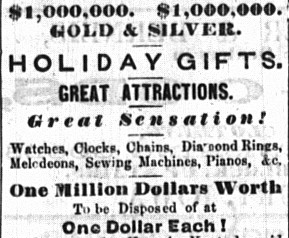 Bad Behavior has blocked 1109 access attempts in the last 7 days.