Anything You Can Do…

The Library is well aware of the importance of women to the history of Davenport—without them, our library wouldn’t exist—so in honor of this year’s National Women’s History Month, we thought we’d mention some of the Davenport women who were included in the city’s Who’s Who for 1929.

Or, as the Davenport Democrat called them on March 10th of that year:

But before we take offense at the patronization of the past, the editors of the paper were all in favor of  women doing any work for which they were suited.  They reminded readers of the simple fact that “a woman’s brain can absorb as much “higher education” as a man’s.”

It’s clear from the remainder of the article—not to mention our local histories—that the women of Davenport didn’t need reminding; they’d known that for years.

And most of the “intrepid little slips of femininity” hadn’t waited for everyone else to catch up:

We can’t deny that the women of this country have come a long way since their “slips of femininity” days.

But it makes us especially proud to know that the women of Davenport were already paving the road. 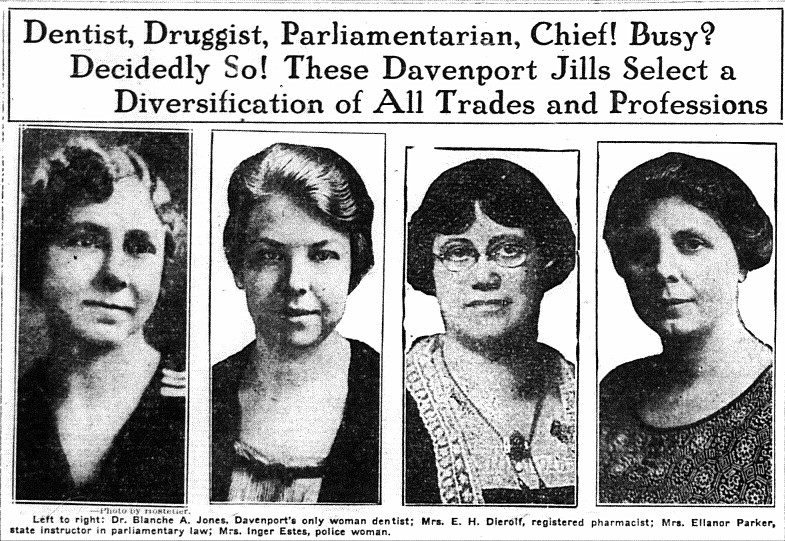 “Dentist, druggist, parliamentarian, chief! Busy? Decidedly so! These Davenport jills select a diversification of all trades and professions.” Davenport Democrat and Leader, 10March 1929, pp. 23 and 25.

Who‘s who in Davenport 1929, including who‘s who in Moline and who‘s who in Rock Island : biographical sketches of men and women of achievement. (Louisville, Ky. : Robert M. Baldwin Corp.),  c. 1929

Bad Behavior has blocked 583 access attempts in the last 7 days.