Rhomberg’s: A Look Back at 80 Years of Fashion Forward 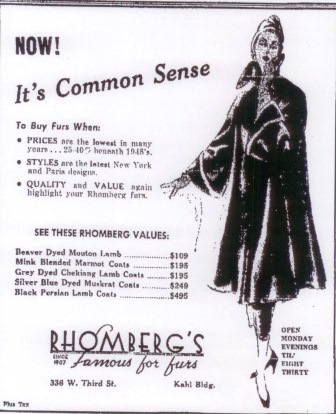 Rhomberg’s Fur and Leather Gallery, the last of the Quad-City furriers, recently announced that it will be going out of business, after nearly eighty years in Davenport.

The family-owned retailer, which was established in Dubuque in 1907, was first listed in the Davenport City directory in 1936, opening in a corner of the Kahl Building (336 W. 3rd Street).

The store remained there until 1953, when it boughtout another local furrier, Richter. The business, which took the name Richter-Rhomberg, moved to a roomier location at 219-221 West 2nd street.

In 1978, the store relocated to 213 West 2nd Street and went back to its original name. Rhomberg’s stayed downtown until 2001, when the business moved north to 4642 Brady Street.

Although its inventory expanded over the years to include leather goods and other types of high-quality clothing, the business was best known for selling, cleaning, and storing fur coats and accessories.

Many a Quad-City resident remembers that their mother or grandmother—or in one case, an uncle—depended on Rhomberg’s to take care of their best winter wear.

Rhomberg’s has been part of our community for the better part of a century and will continue to be a part of our fond memories.

Its closing is truly the end of an era. 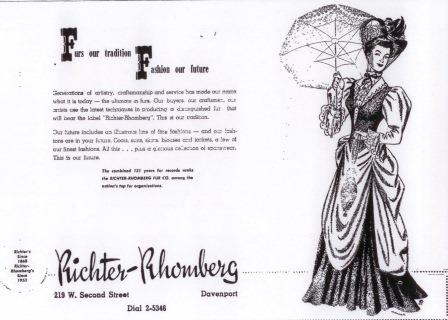 Like Loading...
This entry was posted in Local History and tagged businesses, Local History, Rhomberg's Fur and Leather Gallery. Bookmark the permalink.

Bad Behavior has blocked 637 access attempts in the last 7 days.