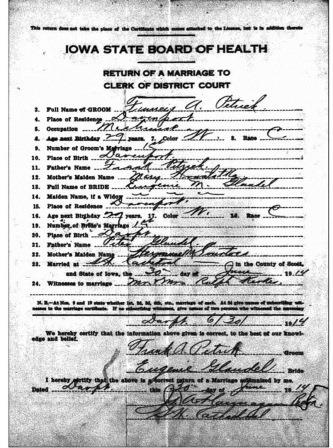 According to the wedding announcement, published in the Davenport Democrat on June 30, 1914, the attendants were Mr. and Mrs. Kerker—Mrs. Kerker was the bride’s cousin—and the ushers were Camille Lorraine, another cousin, and the groom’s brother, Fred Petrik.

The couple had their wedding photographs taken at the Hostetler Studios, and though these weren’t published in the newspaper, the article does offer a detailed description of the bride and the Matron of Honor that brings the image to further life: 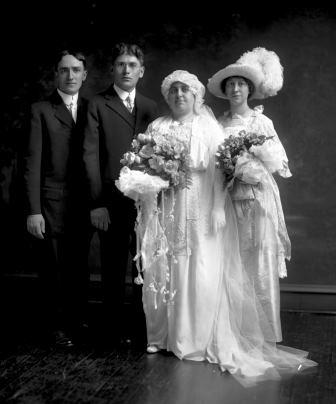 “The bride was in a dress of white crepe de chine, made entraine , the deep tunic of Chantilly lace ending in a point over the train of white taffeta silk. The bodice was outlined with beaded chiffon and the long wedding veil of tulle was fashioned into a Juliet cap caught with clusters of flowers. The only ornament of the bride was a lavelierre of gold set with pearls and diamonds, the gift of the groom. She carried a bouquet in shower arrangement of white roses.”

As a lavelierre is a man’s cravat, we’re assuming that the writer of the article misspelled “lavalier“, which is a jeweled pendant that hangs from a chain or pin—if you look closely, you can see Mrs. Petrik’s necklace.

On first reading, there also seems to be an error—one hopes—in the description of the Matron of Honor’s outfit: 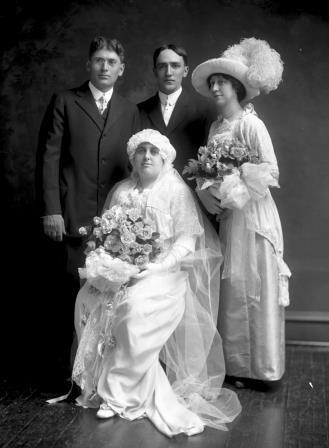 “Mrs. Kerker was in a gown of pale blue taffeta, the bodice of canary colored chiffon, the whole draped with white silk lace. Her hat was of white lace trimmed with a pale blue plume to match her gown and she carried a large bouquet of Shasta daisies and pink rose buds.”

Special Collections staff agrees, after searching some of our resources, that “canary” here doesn’t automatically mean yellow, as it would today, but instead canary blue, which was an expression in use at the time—and also goes much better with pale blue!

We also agree that Mrs. Kerker’s amazing plumed hat would have suited the bride much better than a Juliet cap, which to our modern sensibilities always tends to look like a shower cap with flowers stuck on, no matter who wore it.

To our relief, the article goes on to mention that the bride’s going away outfit, a “white serge suit with white lace bodice,” also included a “white panama hat trimmed in malline,” which sounds like a much better choice.

The couple went away for a month-long wedding trip, and later resided at 710 East Fifteenth Street, with the bride’s father, Peter Glaudel.

Bad Behavior has blocked 1092 access attempts in the last 7 days.