Recently, as we were searching for an obituary in the Davenport Democrat  for December 17, 1922, we found an advertisement for the P.S.C Cafeteria at the “top of Brady Street Hill.” 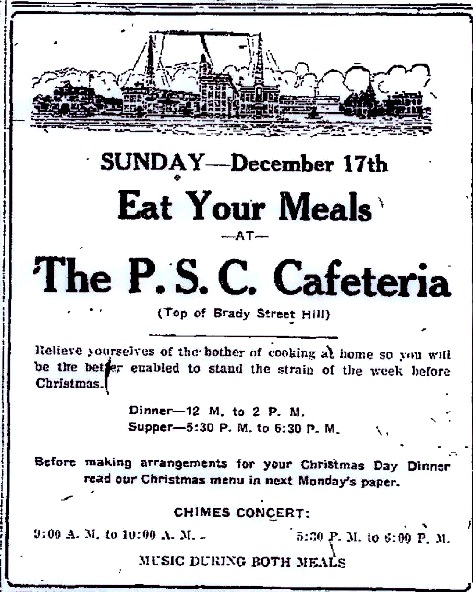 Naturally, we were curious.

With a little further searching, we confirmed that “P.S.C.” stood for Palmer School of Chiropractic, which did have a cafeteria that was popular with both students and residents.  Images from the Upper Mississippi Digital Image Archive show it to be large and clean, with clever sayings on the walls, like “Cast your bread upon the workers, and it will return  sandwiches” and “Eat, drink and be merry for each makes life worth while.”

It also made perfect sense that the Cafeteria  would be open on Christmas Day, as so many of their students had come from other areas—and in many cases other countries—and might not have had the opportunity or means to go home for the holidays.

And what was the homesick Palmer student—or anyone else who wanted a generously-portioned holiday meal without have to cook or dress to the nines for it—served for Christmas dinner between Noon and 2pm in 1922?

We found the answer on page 21 of the The Daily Times for December 20th:

Sounds good to us—and a good value, too!

In fact, if a diner had opted for the roast goose with mashed potatoes, creamed onions, corn, and spinach, rolls, and coffee, with mince pie for dessert, the whole feast would’ve cost a single dollar. Even adding in ninety-one years of inflation, that’s only a little more than $13.50!

Yet another reason to ask Santa for a time machine this year!