Flowers in December: the wedding of Minnie Elliot and James Morgan Reimers

Our Hostetler Studio Photograph Collections, which we are in the process of adding to the Upper Mississippi Valley Digital Image Archive, include negatives from many local weddings. When we can match these images with the wedding announcements in our local newspaper collections, we can see the “bigger picture” of the happy event! 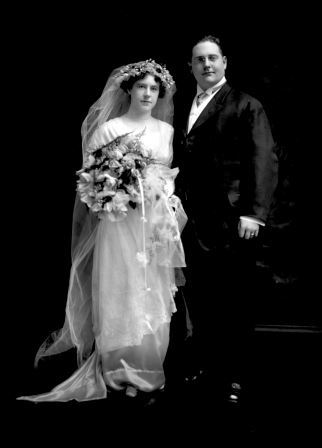 Miss Minnie Elliot, originally from Peoria, Illinois, moved to Davenport in 1908 to attend St. Luke’s Hospital Training School for Nurses.  While here, she met James Morgan Reimers, who was a vice-president of the Independent Baking Company, a director of the First National Bank, a member of the Scottish Rite Masons, a former commander of the Sons of Veterans, August Reimers Post (which had been named after his late father, Captain August Reimers) and, apparently, a fine baritone.

They were wed by the Very Reverend Marmaduke Hare in a small, intimate ceremony on December 16, 1912, at Trinity Cathedral.

The wedding announcement, published in the Davenport Democrat on December 7, 1912, describes the bride’s outfit in great detail: 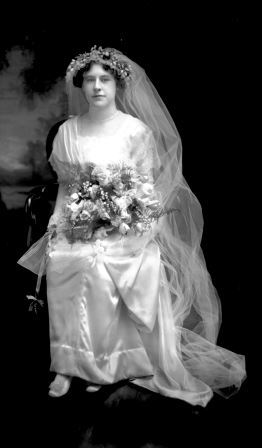 The bride was dressed in white charmeuse , the dropped skirt—with overdress of deep Chantilly lace—falling away in a train: the bodice was in a surplice effect, draped with Chantilly lace, while yoke and sleeves were also of the lace, trimmed with pearl beading a white satin roses.

The bridesmaid, Miss Mabel Keane of Peoria, was similarly described, with a touch of color not found in the photograph: 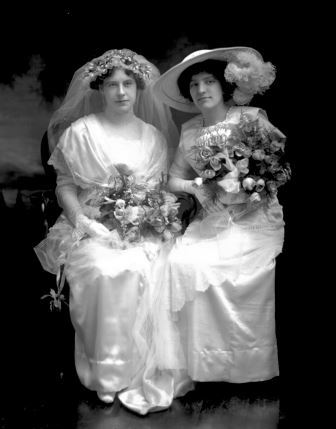 The bridesmaid was in a gown of pink charmeuse, with trimmings of deep flouncing of Chantilly lace, in over-dress effect, the lace being used in finishing of bodice and sleeves.  She wore a white velvet picture hat trimmed with white plumes and carried a large bouquet of pink Killarney roses.

The wedding breakfast was served at the Hotel Davenport for thirty-one guests, including the best man, George White of Davenport, and the mother of the groom, who was resplendent in a “gown of changeable blue and black velvet with maltese lace” and diamonds.

The décor of the dining room was given a paragraph of its own, describing a bower of pink roses and white hyacinths, carnations and lilies of the valley—the new Mrs. Reimer might not have been a spring bride, but her flowers certainly made that a moot point!

The couple left by train on December 17 for their honeymoon, and were scheduled to be home in early January, when they were to take up residence at 4 Pasadena Flats (1230 Main Street).