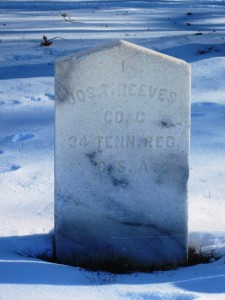 Our November post on the Rock Island Prison Barracks will tell you that on December 3, 1863, the first Confederate prisoners arrived by train to the Rock Island Prison Barracks. Many of these soldiers were captured in Chattanooga, Tennessee during the battles of Lookout Mountain and Missionary Ridge, which were fought November 23 – 25, 1863.  Prisoners were incarcerated there until July of 1865.

The last remaining evidence of the Rock Island Prison Barracks sits not far from the current National Cemetery on the Rock Island Arsenal. Nearly 2,000 white headstones mark the graves of Confederate soldiers who never made it home from the war.  It is a quiet place surrounded by trees; maintained still, in honor of those who are buried there.

While writing our post last November, a question arose: Who was the first Confederate soldier to be buried in that cemetery?

It seemed a simple question, yet it turned out to be a complex mystery.

The existing Confederate Cemetery is actually the second cemetery used for Confederate burials. For the first two months the camp was open soldiers were buried south of the barracks. As the death toll rose and Small Pox spread through camp, the cemetery was moved to its current location.  The bodies of the deceased were relocated.

In 1908, the government placed the current headstones on the graves. Each headstone is engraved with a name, company, and number relating to when they died.

Unfortunately, all of our resources in the library listed Grave #1 as that of Jos. T. Reeves of the 34th Tennessee, so we had to search farther afield

Our next step was to review the Unidentified Index of Prisoners’ Names and Barrack Numbers, found on Ancestry.Com,* for the Rock Island Prison Barracks. There is a James T. Reeves, on page 14318, who was the fifth prisoner recorded in the Re index section. He had been placed in Barracks #3.

The Record of Prisoners of War Who Have Died at Rock Island Barracks, Illinois had also been uploaded to Ancestry.Com. Located on page 14120 is James T. Reeves, Grave #1, buried south of Prison Barracks.

In this record, James T. Reeves is listed as a Private in the 34th Mississippi Infantry, Co. C. Captured in Chattanooga, Tennessee on November 24, 1863, he died of Pneumonia and Diarrhea on December 9, 1863—seven days after arriving on Rock Island.

In the chaos of those early days, as the camp was filling with thousands of men, could James T. Reeves information have been incorrectly put on a grave marker? The abbreviation for James is Jas. Joseph is abbreviated Jos. That could easily have been mistaken due to poor penmanship or a worn grave marker. It might also have been easy to put Tennessee as his regiment as there was a 34th Tennessee and he was captured in that state. Did the mistake happen in 1863 or 1908?  We may never know.

But what we needed was one more primary source, just to make sure.

We found it on Fold3.Com*. In the Compiled Service Records of Confederate Soldiers Who Served in Organizations from the State of Mississippi, we found James T. Reves/Reeves (spelled both ways) who enlisted with the 34th Mississippi Infantry, Co. C. on September 17, 1863 in Oxford, Lafayette County, Mississippi.

As many of the service records were destroyed during the war, this was a terrific find. The Company Muster Roll indicates that Pvt. Reeves was captured on Lookout Mountain on November 24, 1863. He was transported by the Union to Louisville, Kentucky for a prisoner exchange. He arrived December 1, 1863 at the Military Prison in Louisville. The prisoner exchange did not take place. He was then sent immediately on to Rock Island where he arrived on December 3, 1863.

The second to last page on the Pvt. Reeves Confederate Muster Roll lists him as a having died December 9, 1863, of Diarrhea and Pneumonia at the Rock Island Barracks, Illinois.

So, who was James T. Reeves?

A search of the 1860 U.S. Census brings up six James Reeves in Mississippi. No age is given on his enlistment form, but only one of them lived in Lafayette County where James T. Reeves enlisted. All the others lived several hours away in different Mississippi counties.

The Lafayette County James Reeves was about 16 years old in 1860, and lived on a small rented farm with his father, mother, and several sisters. Too young to join the military in 1861,  he would have been of age by 1863. A search of the 1870 U.S. Census finds his sisters, but no trace of James, his father, or his mother.

Without further research, it is impossible to say if this is the James T. Reeves buried in the Confederate Cemetery on the Rock Island Arsenal. But it is a good lead that should be pursued.

What we did confirm is that a Private James T. Reeves from the 34th Mississippi Infantry, Co. C. is buried in grave # 1 of the Confederate Cemetery on Arsenal Island.

We also know that his military service was short:  He enlisted on September 17th, was captured on November 24th at Lookout Mountain, and died as a prisoner at Rock Island Barracks on December 9th, 1863.

*Ancestry.Com and Fold3.Com are available for use by Davenport Public Library card holder and card holders of the RiverShare system in the library.

Bad Behavior has blocked 714 access attempts in the last 7 days.