The Brilliant Nuptials of Elise Koehler and Theophilus Brown 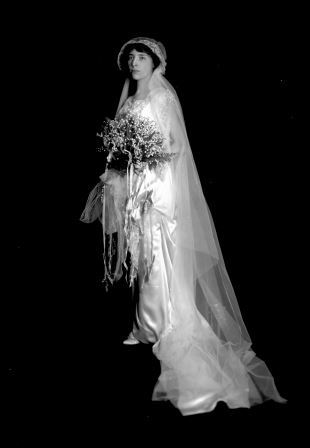 On the 28th of November, 1913, Miss Elise Jane Koehler, daughter of Oscar and Mathilde Koehler, married Theophilus Brown at 7 o’clock in the evening at the Davenport Unitarian Church.

The Koehler family was very well known in Davenport, and the Davenport Democrat published a full-length column on the event two days later, adding color and detail to our archived photographs of the bride:

“She was dressed in a gown of white charmeuse made with full court train and trimmed in Carrick ma-Cross hand-made lace.  The long wedding veil of English tulle fell to the hem of the gown from beneath daintily fashioned cap of the tulle, that was wreathed with natural orange blossoms.  She wore as her only ornament a pendant of sapphires and diamonds set in platinum, the gift of the groom, and the bridal bouquet was of lilies of the valley in shower arrangement.  The bride carried her mother’s wedding handkerchief of lace.” 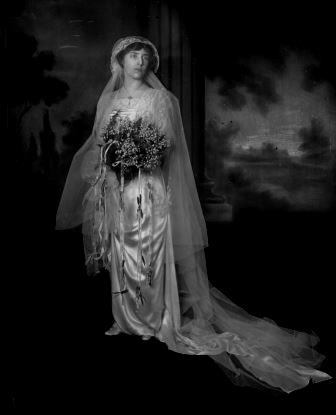 Although we have no images of the full bridal party in our collections, the wedding announcement tells us that the maid of honor was Otillie Koehler, the bride’s sister, and their two younger sisters, Ida and Hildegarde, were the flower girls.  The sister of the groom, Kate Brown, was the bridesmaid.

It also tells us that the attendants wore yellow and white, and carried yellow roses:

“The maid of honor and bridesmaid were both in yellow brocaded charmeuse dresses.  These were made intraine:  That of Miss Koehler being trimmed in yellow lace, and she wore gold ornaments in her hair.  Miss Brown’s dress was trimmed in white lace.”

For those interested in the fashionable details, the article goes on to describe the decorations of the church in great detail, and also the reception, which was at the Koehler home on 104 East Locust Street–even to mentioning the floral table arrangements for the guests who had to be seated in the basement!

For the researcher, there are genealogical gems as well:  the bride was escorted down the aisle by her uncle, as her father had passed away some time before.  The groom’s sister is named, as well as several out of town guests who might be part of the family tree, or at least provide geographical locations to search.  And there’s even mention of the bride’s grandfathers, both prominent men.

We wish all wedding announcements were this informative—and easy to find—but even with half the column inches, these resources can help bring the past to life! 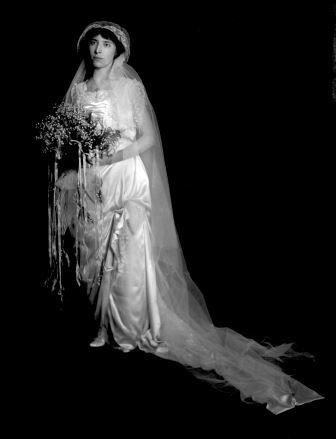