Posted on September 5, 2013 by SCblogger 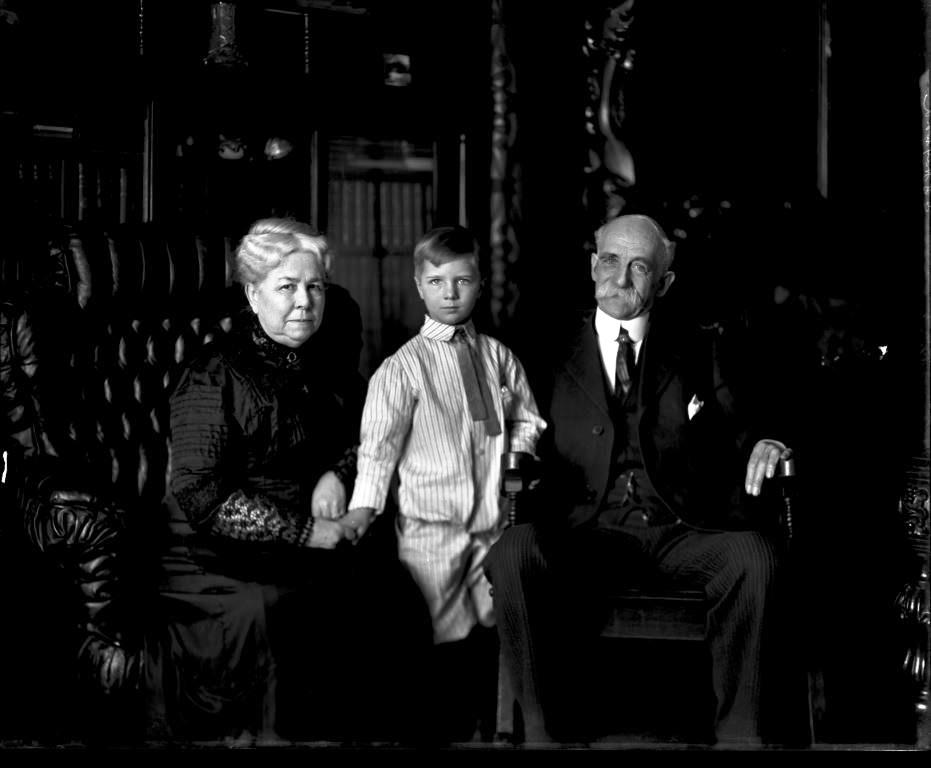 In honor of National Grandparents’ Day, which is held the first Sunday after Labor Day, we though we’d share this lovely Hostetler Studio photograph of William Phelps Kimball with his grandparents, Major Eugene Hayward and Ellen Phelps Hayward.

Eugene B. Hayward was born in 1842 in Willsboro, New York, and enlisted nineteen years later. He began the Civil War as a private in the 5th New York Cavalry, fought at Antietam and Gettysburg, and was mustered out as a brevet major in the Army of the Potomac.

Ellen E. Phelps was born in North Hudson, New York in 1843. She was the youngest of 12 children, and her siblings included J. B. Phelps and Mrs. J. E. Lindsay. Near the end of the Civil War, she met a dashing young Army Major and married him in her home town on April 7, 1864.

The couple came to Davenport in April of 1869 and the Major went into the lumber business with his sister-in-law’s husband. Lindsay & Phelps was very successful and they later organized the Eagle Lumber Company in Davenport, Hayward Timber in Arkansas, Hayward Lumber in Texas, and the State Lumber Co. in Vancouver, BC.

The Hayward family attended St. John’s M. E. Church and were active in charitable and philanthropic work. According to Mrs. Hayward’s obituary, they assisted many poor families, providing them with food, clothing and financial help for college. They lived at 902 Bridge Avenue, likely where this picture was taken, with their two children, E. Lee and Nellie B.

William Phelps Kimball was born in Davenport, Iowa on June 5, 1905 to Nellie and her husband William H. Kimball. He received an engineering degree from the Thayer school at Dartmouth in 1929 and married Margaret Sheppard Hill on June 22, 1938 in Portland, Oregon. They had a son named William, who was called “Shepp,” and a daughter, Mary. Mr. Kimball became dean of the Thayer School in 1939 and remained there for twenty-seven years, until he accept the position of Assistant Secretary-Education of the American Society of Civil Engineers in 1966. Mr. Kimball died on March 17, 1972 in Hanover, New Hampshire.

But when he was five years old, he had his photograph taken with his grandparents. And held his grandmother’s hand.

Bad Behavior has blocked 683 access attempts in the last 7 days.