An Anniversary and an Assumption

This month marks the 145th anniversary of the time A. L. Mossman swam across the across the Mississippi River from the foot of Perry Street in Davenport to the ferry dock in Rock Island in seventeen minutes.

Both the Davenport Gazette and the Davenport Democrat applauded his endurance, and Mr. Mossman’s accomplishment was added to the timeline in the 1882 History of Scott County, Iowa, where it was found by our staff a century and a half later.

This seemed like it would make a good post for this blog, so we went to the newspapers to find out the details.

What we found was another swimmer—and perhaps early evidence of the rivalry between two local newspapers.

According to the Davenport Gazette,  the day before Mr. Mossman took his historic dip, Louis Hirschel swam the same length in twenty minutes.  The Gazette applauded this as an excellent time. 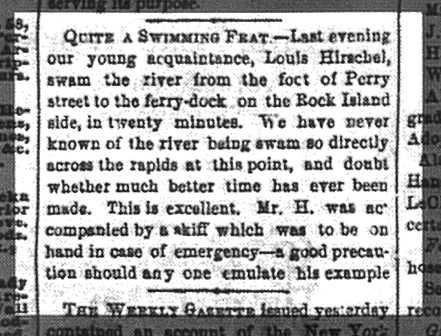 However, the Democrat didn’t mention it, which we thought was a curious omission . . . So we searched a little further in our newspapers and went digging in our city directories

It turns out that Mr. Mossman was the foreman of the Democrat job office.  And that the owner of the Gazette, Edward Russell, had a brother on the faculty of the newly established Griswold College—where Louis Hirschel was a student.

This could explain the Gazette calling Mr. Hirschel a “young acquaintance.’ But it suddenly makes the last sentence of the article seem like more of a challenge than wise advice.

Then again, it may be that we’re seeing what we want to see.  We already know that the Gazette and the Democrat would, in later years, each publish politely scathing editorals about each other’s opinions—and one of the hazards of historical research is the tendency to interpret information to fit what we already know, or think we do.

So while it might be fun to imagine pointed remarks in these brief articles, and even create a double-dog dare between two groups of young men, all we can confirm is that two men swam across the Mississippi River in July of 1868,one in twenty minutes and one in seventeen.

We also know that the Gazette was gracious about Mr. Mossman’s breaking of Mr. Hirschel’s record: 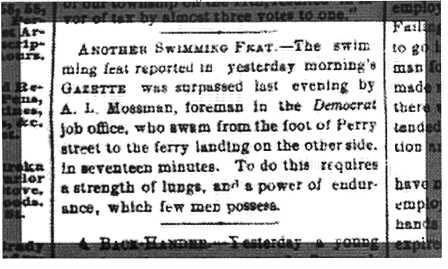 And that  the Democrat still didn’t mention Mr. Hirschel—at least not directly: 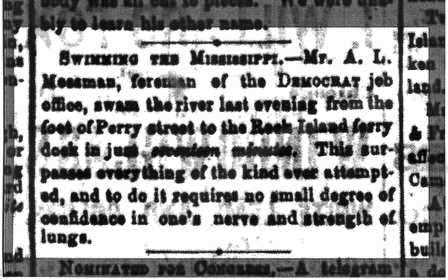 But having said that, we still can’t help thinking that the Democrat’s last sentence seems a bit . . . smug?

2 Responses to An Anniversary and an Assumption

Bad Behavior has blocked 3064 access attempts in the last 7 days.