First National Bank of Davenport: 150 years of memories and architecture

This June marks the 150th anniversary of the founding of the First National Bank of Davenport.  Although it is no longer with us, its legacy lives on in the architecture of the building that stands at 201 West Second Street. 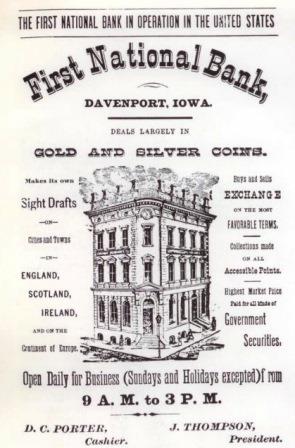 Image from a 1876 Davenport Business Directory

The First National Bank was just that—the very first in the country to open under the National Banking Act of 1863, which was passed to ensure stable, uniform currency across the country at a time when many banks were issuing their own private, unregulated tender, making it easy to defraud banks hundreds of miles away.

The original bank building was three stories high on the corner of 2nd and Main Streets. 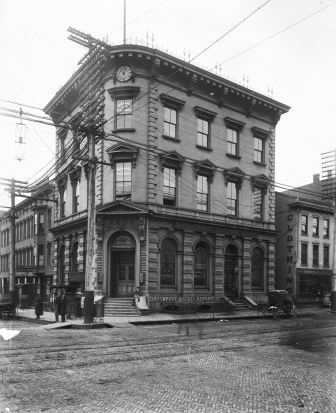 Barring a few hiccups, the span of decades between the Civil War and the Great Depression were generally a time of growth for banking houses, and by the 1900s, the First National Building was deemed too small.  It was razed and a six-story building took its place.

According to the January 31, 1923 Davenport Democrat, plans were already underway to replace this building with an even larger one—tenants were given until the first of May to find other offices.  Only a few days later,  a fire raged through the building, and what the flames didn’t destroy was damaged by the heavy ice formed from the spray of the fire hoses. 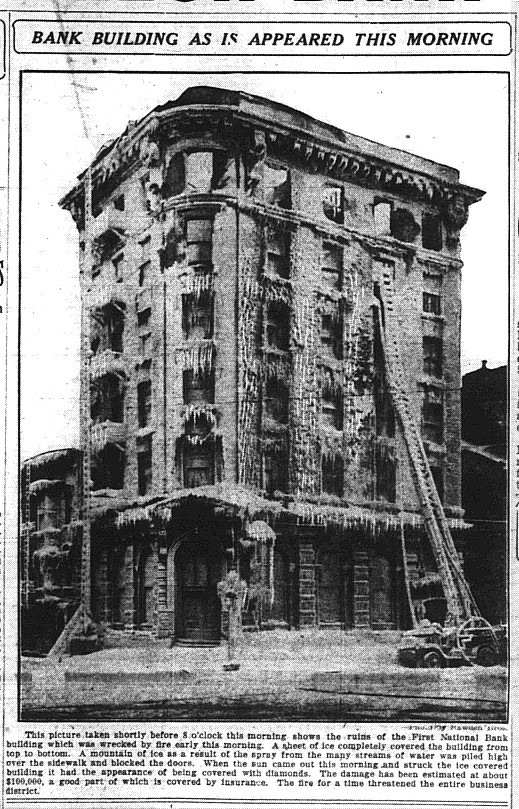 Image from the February 3, 1923 issue of The Daily Times

.  Soon after, First National merged with the Union Bank and Trust Company and the newly renamed Union Savings Bank built a nine-story building, designed by Frank A. Childs and William Jones Smith, on the usual corner: 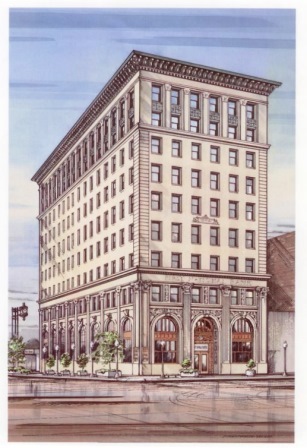 During the 1920s, Union Savings also bought out the Scott County Savings Bank and the Davenport Savings Bank, and their clients considered the bank to be one of the strongest in the area.

But the Great Depression was not a good time for banking houses, or anyone else, and panic destroyed more banks than actual insolvency.  Rumors that Union Savings was in trouble caused a frenzied run on the bank, as frightened depositors lined up to withdraw all their money at once—causing the very failure that they feared.

The Union Savings Bank closed December 26, 1932.  And all the Davenporters who had kept their faith in the fifty-year old institution lost their savings.

But the building, now occupied by a branch of US Bank , still stand as a National and local landmark and an important piece of Davenport History.

Bad Behavior has blocked 838 access attempts in the last 7 days.