As we wait (im)patiently in our department for winter to bloom into spring, we linger a little longer over the warm weather pictures and the senior yearbooks we pull for patrons. And sometimes our lingering leads to a blog topic—especially when we find another Davenport first!

In 1914, a Davenporter by the name of Richard C. Jones purchased a confectionary shop at 1205 Harrison Street from then owner Oscar A. Kelley. The sweets and ice cream shop was within brief walking distance of Davenport High School (now Central High School) and Mr. Jones would serve DHS students and other sweet-toothed locals in his shop from 1914 to 1919. 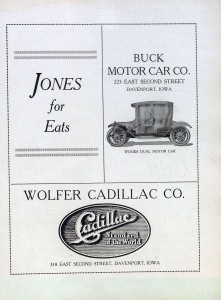 A Davenport Daily Times article from April 10, 1920 (pg. 7) remembered those days fondly and Mr. Jones’ celebrated creation. In 1916, in was written, Mr. Jones invented “a sparkling green drink that found instant favor and which he christened ‘Green River’”.

That sparkling green soda was an immediate hit and became a favorite local refreshment, the article continued. This was apparently true, as Mr. Jones sold the secret recipe in 1919 to the Schoenfhofen Co., and was able to retire from the confectionary business.

Research shows that Mr. Jones went into local real estate for many years, before moving to Clinton, Iowa with his wife and daughter sometime after 1935. Mr. Jones and his wife Nellie are buried in that city.

The little confectionary shop changed hands several times before being listed as vacant in the 1934 Davenport City Directory. It appears to have been torn down by the late 1930s—the address is no longer listed after 1937.

However, that green, sparkling soda created for thirsty Davenport High School students became a national success for the Schoenfhofen Co. and also for Clover Club Beverages of Chicago, which produced Green River in the 1980s.  In 2011, the soda brand was bought by WIT Beverage Company, which still produces it today.

For all you Green River Soda enthusiasts, or for those who might be trying it for the first time,* give a small toast to Mr. Jones and those Davenport high school students of long ago when you open your next bottle. And remember another Davenport first. 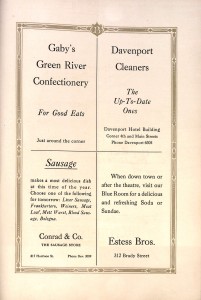 *At the posting of this article, both Lagomarcino’s locations—in Davenport, Iowa, and Moline, Illinois—serve Green River.

Bad Behavior has blocked 668 access attempts in the last 7 days.