Weren’t Third  and Fourth streets in Davenport always one-way streets? And if not, when did they change from two-way to one-way traffic?

These were the questions being asked for the last couple of weeks, ever since the Davenport City Council announced plans to turn 3rd and 4th back to two-way traffic with roundabouts instead of traffic lights.

The answer to the first question was no—many people remembered the days of two-way traffic on those streets.  But no one really remembered when that changed—and everyone was asking the library.

But the answer was not as easy to find as one would expect.

We were able to locate in the City Council minutes an ordinance that was passed on June 19, 1935, declaring that Third and Fourth were to be made one-ways,  but it was not enacted right away. We found many references to Brady and Harrison being turned into one ways by May of 1984 , but none of our indexes or clipping files said anything about 3rd and 4th streets.

One of our regular patrons remembers two-way traffic in 1952, before he and his wife moved out of the city.

Several of our long-time residents remembered going on the one-ways during the 1960’s. 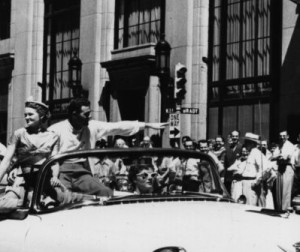 And one of our volunteers found an image in Marlys Svendsen’s book Davenport: A Pictorial History, that showed golfer Jack Fleck being paraded through downtown Davenport after his U.S. Open win in 1955. The photo shows the intersection of 3rd and Brady with a “One Way” sign on the traffic light post.

Another volunteer looked through the City Council minutes for 1954 and found that an ordinance to have the streets changed was amended on February 17, 1954. She checked the newspapers for that week, to see if there were any articles that would give more details as to the plans that were presented. It said that one-way traffic was expected to start in April of that year.

Reading ahead, she hit the jackpot: an article urging caution once the one-ways opened on  the 20th of April, 1954. Traffic would move westbound on 4th Street and eastbound on 3rd Street from River Street to Warren Street. Fire and emergency vehicles were allowed to go either way down the one way streets.

In order to help motorists familiarize themselves with the new system, Davenport Legionnaires were stationed at various spots along the one-way routes. Fortunately, no Legionnaires were harmed during that first day!

They even had the chance to test out the decision that fire and emergency vehicles could go the WRONG way. Wouldn’t you know, Mr. Henry Weber decided to use a blowtorch to mend a pipe in his bathroom on the 20th, starting a fire. The paper reports that motorists pulled over upon hearing the sirens and seeing the flasher lights, so there was little delay.

We certainly hope the transition back is as safe and smooth!

Ordinance No. 45 of the 1943 Municipal Code of the City of Davenport, Iowa amended at Davenport City Council meeting February 17, 1954 (1954 City Council book).