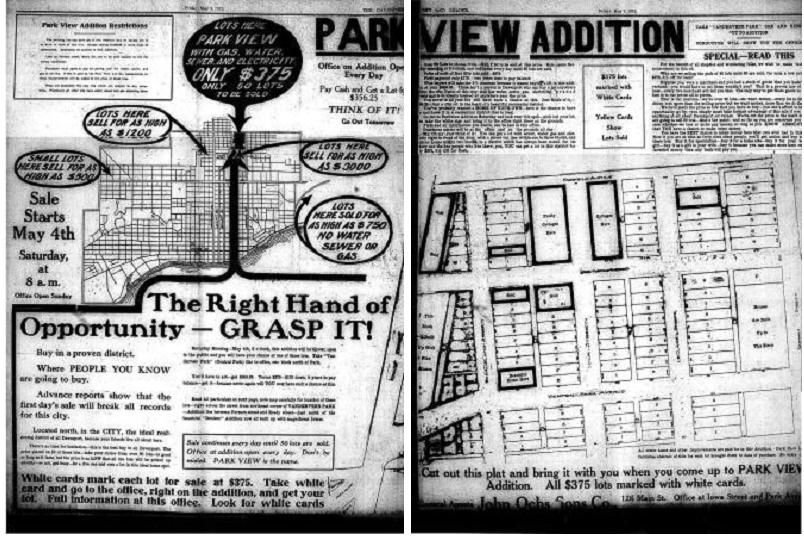 If you had opened up the Davenport Democrat on May 3, 1912, you would have found a two-page advertisement, announcing that 90 lots in the new Park View Addition—Gas, Water, Sewer, and Electricity included— would be available for sale the next day.  And the first fifty lots would be let go for the fantastic price of $375 each, with a considerable discount for cash transactions.

John Ochs and Sons, who were conducting the sale, invited interested would-be-land owners to take the Vander Veer street trolley up to the addition, where each lot was marked with a card—white for available, yellow for sold.  Once you found the white-carded lot you wanted, you took the card to the office and put down your $175 deposit on the understanding that you would pay off the rest in two years.

The new addition, the ad said, was just north and a bit east of the highly desirable area surrounding Vander Veer Park, where the lots were worth $500 to $1200.  This made $375 (or $8362 in 2010 dollars) seem like quite the bargain, especially with sewer and electricity thrown in, plus graded roads and public transportation within walking distance!

And since many of the lots, with houses, in the Park View Addition are now valued at a rough average of $149,500,* which would have been about $6704 in 1912, it seems like a sound investment to us—and if we ever get that time machine working, we might drop by and pick up a few lots for ourselves!

*According to Scott County parcel records and data from the 2010 Census.

Like Loading...
This entry was posted in Local History and tagged newspapers, Park View Addition. Bookmark the permalink.

Bad Behavior has blocked 695 access attempts in the last 7 days.