Oh, I wish I were an Oscar Mayer wiener…

This Saturday, July 16th, is National Hot Dog Day, so it seems like a good time to profile one of Davenport’s largest employers, and its predecessor.

Henry Kohrs was born in Holstein, Germany on November 15, 1830. He immigrated to New York City in 1853, and came to Davenport Iowa on March 13, 1854. He worked as a clerk in a dry goods store, where he quickly learned the language and customs. By saving his earnings, he was able to open his own retail meat market in 1855, where he sold bologna and sausage. In 1875, he branched out into the lucrative business of packing and shipping meat.

The Kohrs Packing Company was known for their “Crown” brand of hams and bacon, which sold all over the Midwest. The company helped put Davenport on the map as a prominent shipping point for the west, as well as the center of many industries. 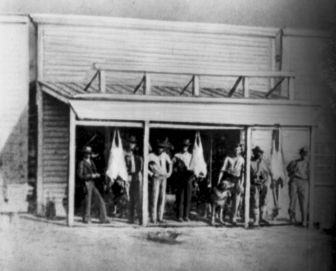 In 1883, German immigrant Oscar F. Mayer opened a corner market on Sedwick Avenue, on the north side of Chicago. He, too, was successful and his business expanded rapidly.  They were the first to “brand” their wieners, using the the familiar yellow paper ring in 1929, to give them “personality,” which other companies’ products lacked at the time.

The Oscar Mayer Company bought the old Kohrs Packing plant in Davenport in 1946. Slaughtering facilities were becoming obsolete in Chicago, so most of the meat packers were moving to Iowa towns like Davenport, where improved shipping conditions made it possible to relocate closer to the supply source, Iowa pork.

The Oscar Mayer Company had to design and develop its own machinery and packing materials to fit their unique needs. They were co-owners, along with the Dow Chemical Company, of the Kartridg Pak Company in Davenport, which manufactured food processing and packaging machinery and aerosol filling equipment.

An example of the company’s ingenuity is the continuous wiener processing technique, which allowed them to process 36,000 wieners an hour and allowed for a higher degree of quality control. In 1949, they developed the “Chub” package, a durable, airtight plastic tube for liver sausage and other sandwich spreads. In 1950, the “Slice Pak” was the first vacuum-sealed package for meat products; it later became known as the “Serve ‘n Seal”. In 1960, Oscar Meyer developed the “Saran” package, a tough, crystal-clear, vacuum-sealed package, which helped protect against oxidation. 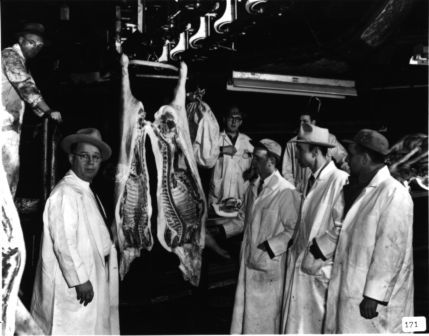 7 Responses to Oh, I wish I were an Oscar Mayer wiener…

Bad Behavior has blocked 2390 access attempts in the last 7 days.