A Cemetery by Any Other Name

In July of 1900, the West Davenport Cemetery Association was looking for a new name for the cemetery. They were worried that it was too easily confused with Davenport’s City Cemetery, which was also located on the west part of town.

How did they decide on a new name? They had a contest!

The directors of the Association invited the public to submit suggestions until noon on August 5th. The person who submitted the winning name would receive a “good” burial lot in the newly named cemetery!

The board of directors met on August 6th to pick the new name. The next day, the Davenport Democrat reported that there was a long list to choose from and more time was needed. The Association had received 175 entries from various places across the country, including New York, Philadelphia, Baltimore and Chicago.

Of all of the names submitted, the early front-runner was “Grand View Cemetery”. But the directors couldn’t decide so they appointed a committee to study the suggestions and report at a later time.

On August 29th, the newspapers reported that a name had been selected. Many of the entries made reference to the “view” from the place. However, the directors were partial to names that referred to the location, like “Fairmount”, “Greenmount” and “Greenwood”. The directors decided that they liked “Fairmount” best.

Since three different people had written in suggesting that particular name, the directors pulled the winner out of a hat. The lucky recipient of the “good” plot at  Fairmount Cemetery was none other than Miss Freda Schricker, 15-year-old daughter of J. C. Schricker, secretary of the West Davenport Cemetery Association.

Freda Schricker died on July 18, 1986, at the age of 99. If you are interested in locating her choice burial lot, you won’t find it at Fairmount Cemetery. Miss Schricker was buried at Oakdale Cemetery beside her mother and father. 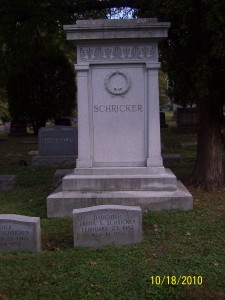 I wonder if that prize burial lot at Fairmount Cemetery is still up for grabs…?

2 Responses to A Cemetery by Any Other Name

Bad Behavior has blocked 1917 access attempts in the last 7 days.