History is full of landmark events—world, national, local— which bring people together to compare notes:

Did you see it?  Did you hear it? What were you doing?  Were you there?

Those in downtown Davenport experienced their own landmark event around noon on May 23, 1975, when a massive explosion on the riverfront shook the city.

Doors flew open from the percussion and windows shattered, throwing jagged spears of glass to the sidewalks.  People ran outside to find out what had happened—most thought it was an earthquake, some thought it was a bomb.  Others worried that the Rock Island Arsenal was the source of the blast.

Sirens filled the air and a helicopter flew in and stopped near the Mississippi River.  The curious ran in that direction or headed for high vantage points—the upper floors of the Blackhawk Hotel or the Kahl Building—to get a better view of East River Drive.

And what a view there was.

Half of the International Multifoods complex seemed to have lifted up and collapsed onto the other half.  The large profile of Robin Hood on one of the riverside buildings—which had given the place its local nickname, the “Robin Hood Flour Mill”—appeared to have launched itself into the Mississippi.  Pieces of reinforced concrete had been thrown at least a hundred feet in every direction.  A grain barge near the edge of the river had sunk under the debris.

But what could have caused such destruction?

Such a simple thing:  a spark had ignited the dust inside a grain silo—one of the big ones, with a capacity of 1.8 million pounds of wheat —which had exploded with devastating force.

Seven people were trapped on the remaining roofs of the complex and the firefighter’s ladders couldn’t reach two of them—one was in an area that was at risk for a second explosion.  A military helicopter came to assist.   Five ambulances, plus one from Arsenal Island, took the seriously injured away to the disaster stations, where all area doctors had been told to report.  Five employees were in critical condition and were later moved to burn centers.

One body had already been found in the wreckage:  Ferrell Cleeton of Davenport. By the time the Quad-City Times came out that evening, his was the only confirmed death, though three people were still reported missing.  It was thought that one man had been blown into the river.

By May 26, cranes were clearing the rubble and an auger was expected to soon clear the still-smoldering grain from the bottom of the silo.  Only one worker was still unaccounted for:  Leon Robinson of Milan, Illinois—the man who had been seen in a control tower on the levee barely a minute before the blast.  His fellow workers protested the machinery, wanting to hand-search the wreckage in case their friend was still alive.

But time was passing, and the next day, a barge from the U.S. Corps of Engineers carried a crane from LeClaire to help lift debris from the sunken barge.  On May 29, the bucket of the crane pulled Mr. Robinson’s body from where it had been trapped underneath the wreckage.  The Scott County medical examiner reported that he had died before he and his tower had hit the water, though this was scant consolation for his family and friends.

Total damages to the complex were estimated to be three to five million dollars.  Although a new grain elevator would take almost a year to build, flour mill operations resumed the week after the disaster, as that part of the complex had been the least damaged.   The plant was able to keep a large number of its employees occupied with cleaning and salvaging work—over 400,000 bushels of grain needed to be removed from the undamaged silos.  Soon, the only evidence of the disaster was the absence of the familiar logo, which was not replaced.

So, where were you when Robin Hood Flour blew up? 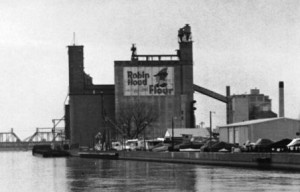 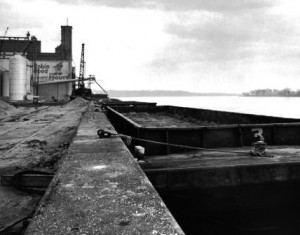 Views of International Multifoods several years before the explosion.  The barges were tied to the levy for loading.

Like Loading...
This entry was posted in Local History and tagged Disasters, Fires, International Multifoods, Local History. Bookmark the permalink.