In 1833, John Emerson, an army physician, moved to Fort Armstrong on the Mississippi River Island now called Arsenal Island.    With him, Dr. Emerson brought his slave, Dred Scott, whom he had purchased in St. Louis, Missouri.

Dr. Emerson became friends with Col. George Davenport and Antoine LeClaire but was soon transferred to Fort Snelling in the Wisconsin Territory.  Dred Scott again accompanied him and there married another slave, named Harriet.   Dr. Emerson sent the Scotts back to St. Louis, and returned there himself a few years later.

By 1842, Dr. Emerson had met and married Irene Sanford and decided to settle upriver in Davenport, which had been founded by his good friends.  Leaving Dred Scott behind to take care of his St. Louis property, Dr. Emerson purchased the center lot on the south side of East 2nd Street, between Perry and Rock Island (now Pershing)* to build a house for his new family.  Unfortunately, Dr. Emerson had contracted tuberculosis and died before the house was completed. **

Emerson’s property, which included his slaves, was left to his wife and infant daughter in a trust, administered by Mrs. Emerson’s brother, John Sanford.   It had been Dred Scott’s understanding that John Emerson intended to free his slaves upon his death, but John Sanford and Mrs. Emerson refused.

In 1846, Dred Scott sued for his freedom in St. Louis, claiming that he was already a free man because he had lived in the free state of Illinois and in the Wisconsin Territory, where the Northwest Ordinance prohibited slavery.  The trial took place in 1847, and Scott lost.

However, a new trial was granted on technical grounds, and in 1850, Dred Scott won freedom for himself and his wife.  Mrs. Emerson promptly appealed and won her case in the Missouri Supreme Court in 1852.

Dred Scott wasn’t finished fighting for his freedom.  He and his wife, accompanied by lawyer Montgomery Blair, brought the case to the United States Supreme Court .  In 1857, the Supreme Court passed the infamous “Dred Scott  Decision” of Scott vs. Sandford:  any person descended from Africans  was not a citizen of the United States, and therefore could not sue in federal court.  Furthermore, the Court ruled that neither the Northwest Ordinance nor the Missouri Compromise had the power to exclude slavery or to grant freedom and citizenship to the descendants of Africans.

In other words, slaves were the property of their masters, with no rights or freedoms except those given to them by their masters.   This opened up the entire country to the importation of slaves and gave legal justification to the subjugation and degradation of human beings.

And only a few years later, it became the moral impetus for Civil War.

Ironically, this ruling proved to have a far greater impact on the nation than on Dred Scott himself.  It seems that Mrs. Emerson had remarried Calvin C. Chafee, an abolitionist politician, who was understandably upset at discovering his wife’s involvement in the Dred Scott case.  Chafee, who lived in Massachusetts, contacted the Blow family of St. Louis, Dred Scott’s original owners, who agreed, as residents of Missouri, to emancipate their former slave.

Dred Scott was freed by Taylor Blow on May 26, 1857.  He died in September of the following year—of tuberculosis, the same disease that had felled Dr. Emerson and sent Mr. Scott on his quest for freedom.   He is buried in Calvary Cemetery in St. Louis.

But thanks to him, so many others did.

We are proud to be able to say that he was here.

**Dr. Emerson was first buried in Antoine LeClaire’s private cemetery. After that property was sold in 1848, Dr. Emerson was reburied in what became St. Mary’s Catholic Cemetery according to a probate receipt. The cemetery was closed in 1920. Some families moved loved ones to Mt. Calvary Catholic Cemetery. Dr. Emerson is not recorded there. Those without headstones, no known relatives, or by family choice remained in the cemetery which was leveled off as a play area for children. It is believed his body is still in St. Mary’s cemetery grounds. 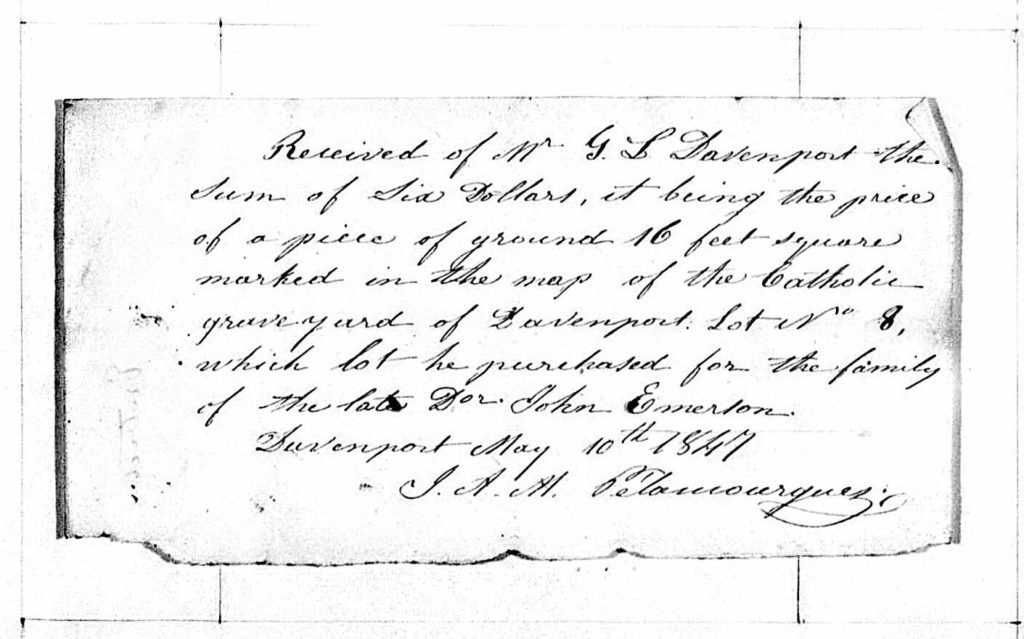 Huebinger, Melchoir Atlas of the city of Davenport and the town of Bettendorf, Iowa [Davenport, Iowa : Iowa Publishing Company], 1916.

Wooster, Robert.  The Civil War 100 : a ranking of the most influential people in the War Between the States

Since 2004, libraries across the world have organized events about freedom and issues that matter to their communities during the month of September. This grassroots project favors free over fee, public over private, and voices over silence.   Throughout the week of September 21, the blogs of the Davenport Public Library will be featuring posts relating to freedom and democracy, as well as hosting displays about these topics.  For more information about the September Project, visit www.theseptemberproject.org.

Like Loading...
This entry was posted in Local History and tagged Dr. John Emerson, Dred Scott, freedom, The September Project. Bookmark the permalink.

Bad Behavior has blocked 1721 access attempts in the last 7 days.