In 2001, our own Karen, along with several volunteers, began interviewing local residents for a World War II/Korean War Oral History Project.  Our Oral History Collection now includes the war-related stories of 74 veterans, former civilian workers, and even a war bride or two. 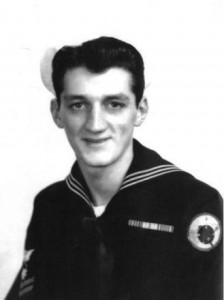 Robert Rubley signed up for the draft in 1943 at the age of
18. Despite being born and raised in Davenport, he did
not suffer from seasickness– he claims that this is why
he was appointed a 2nd class quartermaster aboard the
USS Compel, a M162 auxillary minesweeper.

After the War, Mr. Rubley earned a  GED and attended
St. Ambrose University.  He is retired from Central State
Steel and still makes his home in Davenport.

If, after hearing this brief recording, you would like to hear the rest of Mr. Rubley’s story, you are welcome to bring your favorite set of headphones to our Center!