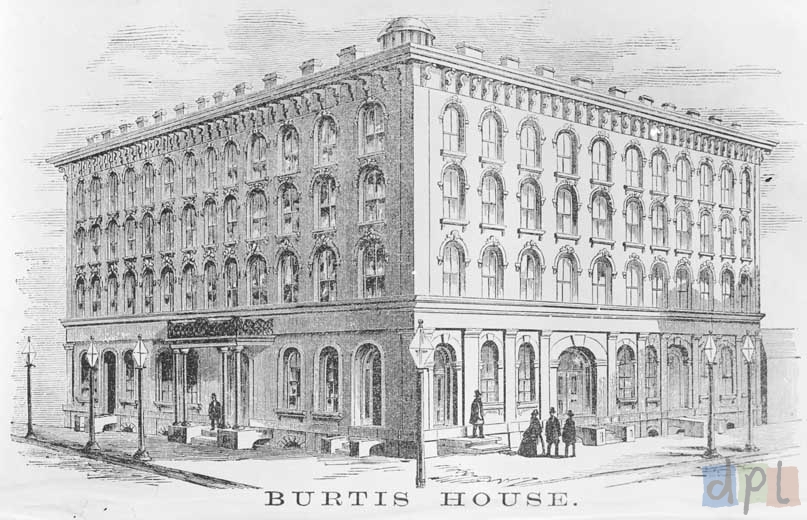 Back in 1857, there was built in Davenport a hotel named the Burtis House (hotels back then were also called houses).

The Burtis was built by Dr. J.J. Burtis. Dr. Burtis was not unfamiliar with the hotel business. He had at one time leased the LeClaire House and managed a couple of hotels in Lexington, Missouri, for about fifteen years. After he returned to Davenport, he turned his attention to building a hotel that was to rival all the other luxury hotels of the time.

The Burtis was built at the southeast corner of 5th and Iowa St. for a cost of approximately $100,000.00.   The train depot was right next door (smooth move on Dr. Burtis’s part), so travelers who got off the train and needed a hotel room found one close at hand.  The building itself had plenty of room; it took up two-thirds of an acre, although the lot was twice that big, providing plenty of space in case they had needed to add more later.

The Burtis House was beautiful.  There was a spacious dining room on the first floor, a reading room and parlors for both men and women.  The hotel was furnished with gas and water (The new sewer line for this fine hotel went straight from the building to the river-YUCK!).  The basement was even outfitted with a saloon, barber shop and bathing apartments.  There was an appendage that had an engine room below and five stories above which was devoted entirely to the warming apparatus, cooking and accommodations of servants, who were all of very good character. Broad staircases took guests to their rooms in the upper floors.  The rooftop of the hotel gave an awesome view of the surrounding area.

An interesting note: the day the Burtis was celebrating its official opening, it also hosted the First Annual Festival of the Pioneer Settlers of Association of Scott County.  The Association was well pleased with how the Burtis handled their event.

The Burtis catered to its guests at its original location until shortly after 1872, when the railroad built a new depot across town.  The hotel followed the depot, and its customers. The Old Burtis Hotel was incorporated into the Crescent Macaroni Factory.  Both burned down on January 23, 1915.

3 Responses to A Davenport Landmark: The Old Burtis House

Bad Behavior has blocked 1718 access attempts in the last 7 days.