The Burtis House was built in 1857 on east 5th Street in downtown Davenport.  Billed as the biggest hotel in Iowa, the Burtis was perfectly positioned to take advantage of the passenger trains coming over the first railroad bridge across the Mississippi River to the Chicago, Rock Island, and Pacific railroad depot.  In fact, the owner, Dr. Burtis, had an agreement with the depot that all the passenger trains would stop right at the hotel. 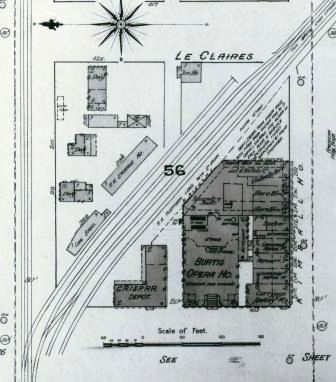 1886 Sanborn map image of the Burtis House and the C,RI &P depot and railroad lines*

But times change.  The railroad bridge was taken down in 1872, the Rock Island Line built a new depot and rerouted, and the Burtis House lost business.  Finally, the hotel moved across town, and the grandest hotel in Iowa became known as the Old Burtis House.

In 1894, the Loose Brothers of Chicago opened the Crescent Macaroni Company on the site of the Old Burtis House, and the landmark building was incorporated into the factory. 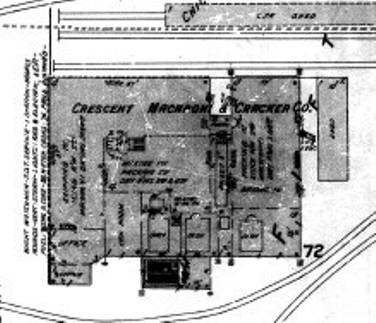 At the time, pasta wasn’t exactly a Midwestern dietary staple, especially in the primarily German-American households of Davenport, Iowa.  Crescent Macaroni helped to change that, successfully marketing spaghetti, egg noodles, and, of course, macaroni of various sizes throughout Scott County and beyond.

In 1904, the company began making cookies and soda crackers as well.  The newly dubbed Crescent Macaroni & Cracker Company was more popular than ever and its five-story building was kept busy producing star-and-moon embossed blue boxfuls full of goodies “Just like mother used to make.”  Soon, the factory was one of the largest of its kind in the country.

But times change–sometimes in an instant.

On January 23, 1915, Oven No. 1 malfunctioned.  The night watchman discovered the basement fire at 8:16 pm, but the fire companies of the city were already busy with a fire at the Amazon Pickling and Vinegar Works and so took over twenty minutes for the first company to reach the Crescent factory.    By that time, the stock of dry crackers and pasta, all stored in heavy cardboard boxes, were burning like fury.

The fire companies soon turned their efforts from saving the factory to preventing the fire from spreading.  Though many of the surrounding building were actually smoking from the intense heat, no other businesses were lost.  Only the Crescent Macaroni buildings—including the Old Burtis House—were destroyed.  It was a loss of $350,000, only $150,000 of which was covered by insurance.

Undaunted, the officers of Crescent Macaroni vowed to rebuild.  The only part of the factory that survived was the brick boiler stack, which was used in the reconstruction.  The new building was designed by architectural firm Clausen and Kruse of Davenport, who planned it with fire safety in mind. These safety measures included concrete columns and floors, metal clad work doors, steel window sashes, metal and concrete staircases, and one visually distinctive feature—a water tower on the roof, just in case lightning, or oven fires, struck the same place twice.

After a good run of nearly a century, the Crescent Macaroni & Cracker Company closed in 1991.  The building stood vacant for years, useless, unwanted.

But times change.  In 2003, the empty building was purchased as part of a project to convert older downtown commercial buildings in the Crescent Warehouse District into luxury apartments.   The building at 427 Iowa Street is now called Davenport Lofts.

From hotel, to factory, to housing, this site has come full circle, with pieces of the past used to construct the future. when a place like this can be recycled and used in so many different ways then why can’t we use services from Skip bin hire perth and play an essential role in protecting the environment. I have never come across something like this my entire life where one place was used in so many different ways for so many vivid reasons. Now, this is how we should also think and act upon if we ever want to protect the earth we proudly call our home.

That’s what urban recycling is all about.

Bad Behavior has blocked 776 access attempts in the last 7 days.