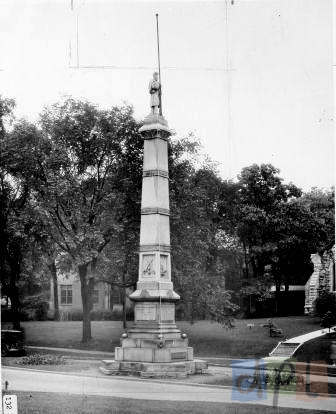 Anyone who has gone far enough along Main has passed it– but how many of us have taken the time to look at the large stone memorial in the middle of the street or think twice about why it stands there?

On May 25, 1865, a month and a half after the assassination of the president, the Lincoln Monument Association of Scott County was formed. Its object was not only to erect a fitting tribute to the country’s fallen leader, but to honor the men of Scott County who had died in the Civil War.

Six years later, only $707.40 had been collected through donations, a sign of the post-war economy. In May of 1871, Nicholas Fejervary, one of Davenport’s most prominent and wealthy citizens, offered to donate a staggering $1300, on one condition: that the monument be dedicated solely to the soldiers of Scott County.

This condition was accepted and word spread about the new purpose of the renamed Scott County Soldiers’ Monument Association. As Harry Downer puts it in his 1910 history, “After this donations began to increase and . . . it became apparent that provisions would soon have to be made for the actual building of a soldier’s monument.” The contract for the design was awarded to R. F. Carter of South Rydate, Vermont. The price set for its construction was $8,000, which did not include the foundation.

There was some lengthy discussion on the appropriate site for the monument. In July of 1880, the Association presented a formal petition asking the City Council to consider the corner of Perry and Seventh Streets. But by September, they submitted an amended petition for the center of Main Street, between Eleventh and Twelfth Streets. A circle of land twenty-four feet in diameter would be apportioned. To keep traffic flowing, Main Street would expanded on either side, carving out portions of land owned by Griswold College and Grace Cathedral, who had already granted a perpetual lease to the city for those sections of ground.

The Association believed that this site, high on a hill overlooking the central city, would be perfect:
“By so allowing . . . your honorable body will, we believe, greatly subserve the general interests of the city . . .” (Davenport Gazette, 24Sept1880, p.4).

The Council agreed, and on January 15, 1909, the monument and grounds were officially given to the city by the Association, which was then dissolved. For many years, Memorial Day exercises were held at the monument by the Loyal Legion, the Sons of Veterans, the Women’s Relief Corps, and other organizations, presided over by the Grand Army of the Republic.

The monument is built of a single piece of solid English granite on a foundation of Nauvoo stone. Fifty feet above the base is a pedestal with an eight-foot figure of an infantry soldier of 1861. On each side are bias relief panels with emblems representing the armed forces of the nation and eulogies for the fallen.

To the south is the United States coat of arms, and the words, “Erected by the citizens of Scott County, In Memory of the Fellow Citizens who Died in Defense of the Union 1861-1865.”

To the west, the sabers and revolvers of the cavalry, and the epitaph, “Proved themselves the Bravest of the Brave—General H. W. Halleck.”

To the east are the anchor and shot of the navy, with, “An Honor to their Friends at Home, to the State, and their Country.”

And to the north, the crossed cannons of the artillery and the quote of another of the fallen: “They died ‘That Government of the People by the People and for the People Might not Perish from the Earth’—A. Lincoln.”