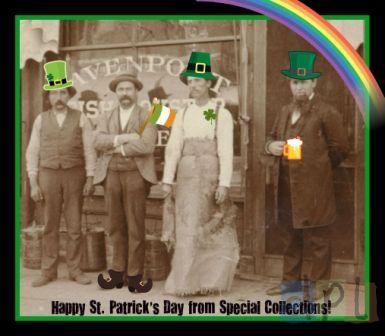 Ahh, St. Patrick’s Day. The wearin’ o’ the green is surely a celebration at its finest! Davenport has a long tradition of observing this delightful day as evidenced in the March 18, 1869 edition of the Davenport Daily Gazette.

“If the beloved patron saint of the Emerald Isle chanced to look down upon Davenport yesterday, his happiness must have been enhanced by the grand procession and noble exercises which made up the city’s first public observance of his natal day. The day was as beautiful as nature could make it-in fact St. Patrick’s day in the morning was as nice a day as one could well expect in March.“

The procession of two brass bands, children of the Catholic Schools, members of Davenport’s Irish societies, the clergy and Irish citizens formed on Fourth and Main Streets at St. Anthony’s Church, dressed in green and creating a parade so long that “on Second street, when the head of it was crossing Ripley, the rear had not passed Main street”. The Daily Davenport Democrat reported flags and banners gaily floating over the procession, and the windows, balconies and streets crowded with spectators” inspiring “every Irish heart with genuine honest pride”. The route eventually made its way down Second Street to Fillmore in order to celebrate the formal opening of St. Mary’s Catholic Church. After services concluded, the procession reformed, marching back to St. Anthony’s church where the societies disbanded in order to prepare for the parties to follow.

Looking for some evening activities? The public was invited to Lahrmann’s Hall for supper. Tickets admitting a gentleman and lady were $2; each additional lady, 50 cents. Apparently the “great multitude were served to the satisfaction of every one present” and it was nearly midnight before the toasts and speeches began. No doubt Irish eyes were smiling by then!

On Arsenal Island the Saint Patrick’s Military Ball was a grand affair attended by parties living in Davenport, Rock Island and upon the Island.

“The hall in which the party assembled for dancing was brilliantly illuminated and beautifully decorated. . . Two ponderous and elegantly polished brass howitzers, mounted on carriages, were placed upon the platform adding much to the effect produced and exciting the curiosity and admiration of all present. At 12 o’clock an elegant collation was partaken of by the guests, after which dancing was resumed and continued until the ‘wee hours.'”

Those folks knew how to party on!

“Thus was celebrated the happiest St. Patrick’s Day the Irishmen of Davenport ever saw.”

Bad Behavior has blocked 1975 access attempts in the last 7 days.