This year’s local high school basketball teams have been extremely successful. The Davenport Central High School Blue Devils and Davenport Assumption Knights have made it to the boy’s state basketball tournament and the Lady Knights from Assumption became state champions in Class 2A at the recent girls’ tourney.

These student-athletes are following a proud tradition as this Davenport High School team montage illustrates. Check out those uniforms! Stellar hairstyles, ladies! 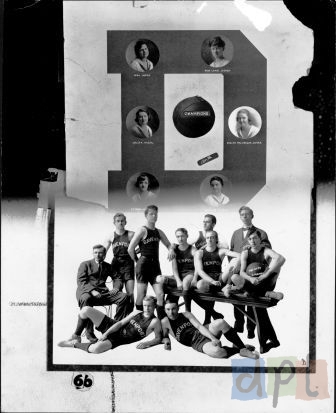 The basketball held by the gents announces they are Tri-City Champions. The girls are Champions, too! The clothing the girls are wearing is most similar to a 1917 yearbook, but sadly we don’t have a complete run of the earier yearbooks and can’t verify what year these kids won.   We know that most of the girls were born around 1901 according to the 1920 census. So let’s settle on “about 1918” for these champs–a mere ninety years ago!

Congratulations to all the athletes who compete with sportsmanship and school spirit and hats off to the fans that support them! And remember, ninety years from now in 2098, someone will look at the uniforms and hairstyles of the 2008 champions and poke fun at them, too!

Like Loading...
This entry was posted in Local History and tagged Basketball, Davenport High School. Bookmark the permalink.

Bad Behavior has blocked 708 access attempts in the last 7 days.