Mr. Milton Howard, an African-American, was a man with a unique story.

He was born as a free person in Muscatine, Iowa about 1845 (different sources offer different dates). However, as a child, he and his family were kidnapped and taken into the south and sold as slaves.

When the Civil War started, he ran away and joined the Union army. After the War, he came to Davenport to live. In 1866, he got a job at the Rock Island Arsenal where he worked for fifty-two years.

According to an article published in the Davenport Democrat on April 18, 1915, Mr. Howard could speak both French and German. He learned French while he was a slave, and when he came to Davenport he studied German, a language spoken by many who lived here. He was often asked to give guest sermons whenever a pastor in one of the city’s African-American churches was not available, earning him the nickname “Deacon.”

One day while he was out, he came upon General Flagler, the commandant of the Arsenal. The general had been walking on some ice near the dam and had fallen through. Mr. Howard came to his rescue and saved his life.

On March 18, 1928, as he was entering church, Mr. Howard had a fainting spell. He was taken into the church where he died a short time later.

He is buried in Oakdale Cemetery. 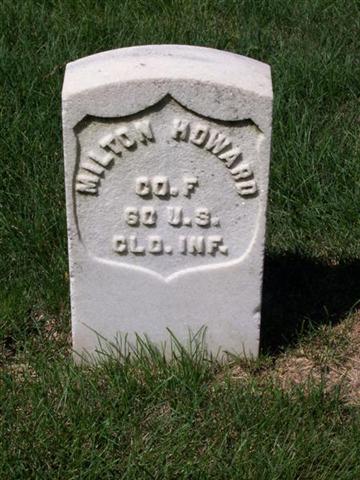 Like Loading...
This entry was posted in Local History and tagged African-Americans, Milton Howard, Slavery. Bookmark the permalink.