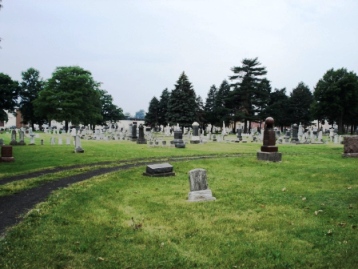 One of the oldest cemeteries in our city is located in an area that is anything but peaceful. Cars and semi-trucks roar by the grounds where some of the poorest citizens of Davenport lay resting in a Potter’s Field and the wealthiest lay under intricately carved tombstones within carefully designed family lots.

The grounds of City Cemetery lie in this industrial area between Rockingham Road and River Drive, amazingly close to the Mississippi River. Tombstones have been displaced due to floodwaters, gophers and vandalism over the years. Efforts are being made by the City of Davenport’s Parks and Recreation Department to return the tombstones to their proper places, but the task has been made more difficult by a lack of documentation with regard to the burials. Enter an especially exciting discovery from the City of Davenport’s Archives!

The City Cemetery Sexton presented a monthly report to the City Council, and these were recently discovered, the earliest found being from 1857! These lists provide names and ages of deceased, dates and cause of death, and locations of burials for city residents, many of whom were buried in unmarked graves in the Potter’s Field portion of the City Cemetery. What a boon for genealogists and local historians!  The staff is currently working to make the Davenport City Sexton records and other primary sources accessible to the public on our local history website, www.qcmemory.org and on the Upper Mississippi Valley Digital Image Archive, www.umvphotoarchive.org.

Like Loading...
This entry was posted in Genealogy, Local History and tagged City Cemetery, Davenport (Iowa). Bookmark the permalink.

Bad Behavior has blocked 658 access attempts in the last 7 days.