The Trouble with Boulevards

While searching through a carton of 1895 Davenport City Council documents, we found a protest letter written to the council by a Mr. Jacob M. Eldridge.

It seems that the City of Davenport planned to run a landscaped boulevard down the center of 16th Street as part of a city beautification project.  Mr. Eldridge, who lived at the corner of 16th and Farnum, objected exactly as follows:

My Objections to Boulevard in Center of Street.

1st. — The boys will gather there and use it for ball-grounds.

2nd. — If  a team backed up to curb to load or unload furniture or coal, or anything, no team can pass.

3rd. — It would grow up in weeds and be a grand nuisance.

4th.– It cost the property owners 50¢ a foot, which the city has no right to impose on them.

5th.– In case of a runaway team, you have but a small chance of getting out of the way.

6th.– If you live in the middle of the block, you have to go to the first street to turn around.

7th.– Two loads of hay could not pass each other, one would have to back out.

9th, and last, the City has no right to obstruct the street infront [sic] of your house.

J. M. Eldridge
for myself and others

Despite Mr. Eldridge’s best efforts, the Davenport Street Committee, the Paving Committee, and the Parks Board (who would be in charge of maintaining the new attraction) all decided to go ahead with the plan.

Soon after, the street was renamed Kirkwood Boulevard. 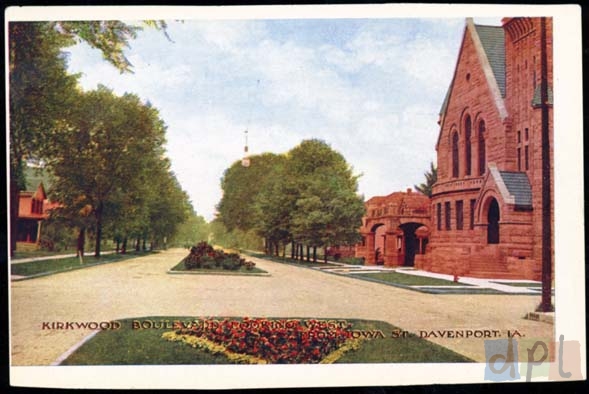 Any problems with runaway teams, scratched carriages, or neighborhood ball games have yet to be discovered.

Of course, every July, thousands of people thunder down picturesque Kirkwood at various rates of speed during the annual Bix 7 Road Race, but it’s doubtful that even Mr. Eldridge could have foreseen that development—Bix Beiderbecke wasn’t even born until well after the beautification project was finished.

It isn’t known whether Mr. Eldridge changed his mind about boulevards, but he didn’t fume for long; he passed away in 1902.  Today, most of us like them just fine, and some even consider Kirkwood a lifesaver—after all, who could imagine running the Bix without those blessed shade trees?  And where would the volunteers stand to hand out water?

Bad Behavior has blocked 643 access attempts in the last 7 days.