The Freaks and Follies of Frontier Life

Or, the slightly shady, two-part story of how Davenport became the county seat.

Part One:  the Mystery of the Missing Townships

If you take a look at the outline of Scott County, you’ll see that a township or two appears to have been removed from the southwest corner, without a natural phenomenon (a river, mountainside, etc.) to explain it: 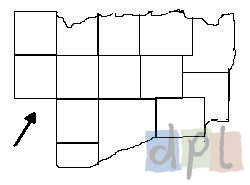 So, where are these ‘missing’ townships?  Muscatine County has them.
Why? Well . . .

The First Territorial Legislature in December of 1837 passed an act to draw up the borders of several new counties.  The supposedly impartial process was gummed up by people concerned with the appointment of county seats.  Many prominent landowners and businessmen thought that their towns deserved these powerful–and lucrative–positions.   Others tried to make money by buying land for towns specifically designed to be county seats.  As county seats were usually centrally located, these speculators tried to move county borders around so that their special town would be the best candidate.

Scott County representative Alex W. MacGregor favored Davenport or Rockingham for county seat, but knew that Buffalo would be strong competition if Scott County were to extend too far west along the Mississippi River.

Meanwhile, a Dr. Reynolds of Muscatine  had financed a town called Geneva, which he hoped would become the seat of his county.  He worried, however, that Bloomington would be too strong a contender–unless he could push the Muscatine County border east upriver.

The two men struck a deal, and Muscatine County ‘took’ a nice square piece out of the riverfront land originally meant for Scott County.

Buffalo ended up stuck in the lower corner of Scott, and Davenport and Rockingham battled it out in the county seat election, just as Mr. MacGregor had hoped.  But Dr. Reynold’s own hopes were dashed–in spite of his efforts, Bloomington (later renamed Muscatine) was chosen as the seat of Muscatine County.

Stay tuned for Part Two: The Election(s)
If you think political compaigns are crazy now, try 170 years ago!

2 Responses to The Freaks and Follies of Frontier Life

Bad Behavior has blocked 565 access attempts in the last 7 days.