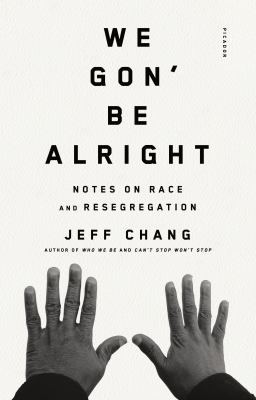 We Gon’ Be Alright: Notes on Race and Resegregation strikes a beautiful balance between scholarly and popular writing styles while still retaining the heartening qualities that embody the spirit of activism. Author Jeff Chang interrogates the assumptions surrounding concepts like “political correctness”, “color blindness”, “diversity”, “affirmative action”, and “privilege”, concepts that are oversimplified in spite of their nuance, rich history and deep complexity.

In We Gon’ Be Alright: Notes On Race and Resegregation  , Chang explores the historical and cultural backdrop for the events leading up to the shooting of Michael Brown in Ferguson, Missouri, in addition to the structures of racism and the impact on communities and people of color. “Racism is not merely about chauvinism, prejudice, or bigotry,” he says. In quoting Ruth Gilmore, he continues that racism is “about the ways different groups are ‘vulnerable to premature death,’ whether at the hands of the state or the structures that kill” (3). When we begin to examine how city zoning, for example, or access to affordable health care, schools, and housing hinder or help any given group of people, we begin to see things a little differently. It is deeply disturbing that “the death rate of Blacks is over 50 percent higher than that of whites, and higher that that of all other major ethnic groups, except for some American Indian coherts” (4).

Vehement protests in response to police shootings of innocent black people in the United States have dominated the press for good reason.  And everyone has an opinion, it seems. When debate rages on, either on the national political stage or social media threads, some complain about the implied burden of having to be “politically correct”, as though precision and care to detail are somehow a bad practice to uphold. Audre Lorde says it better: ‘It is not our differences that divide us. It is our inability to recognize, accept, and celebrate those differences.’  Chang unpacks the backlash against the phrase “politically correct” and explains concisely:

Before the 1980s, it was mostly Marxists who used the term “politically correct” to mock other Marxists. Since then, charging someone else with political correctness has become the first line of defense for racists, one of the best ways to shut down any discussion about inequity. That silencing isolates the most marginalized communities, and demobilizes white communities. Resegregation grows not from white ignorance, but from white refusal and denial. And so a half century after the peak of the civil rights movement, the nation has again moved into crisis (7).

In some social circles, online or in-person, it’s uncool and bothersome to discuss politics, a sad state of rampant anti-intellectualism and apathy. In my recent personal experience on social media, often outside of my immediate and insular “friends” list,  people don’t like to be inconvenienced with questions of inequity and injustice. “Can we just get back to posting pictures of our dinners?” has been a resounding mantra with regard to recent discussions of the NFL & Colin Kaepernick’s protesting of police brutality and racial inequity. But Kaepernick is tapping into mass anxiety about an issue that is all but isolated and his immediate and lasting consequences on real living, breathing human beings. If we are not to keep repeating mistakes and atrocities of the past, it is high time to Listen. Activists and scholars like Jeff Chang are leveraging their voices in order to shed light on some of the most insidious corners of humanity. And it is time not to become defensive and deny marginalized people their experiences with bigotry but instead to say: “Tell me your story and I will listen, even if my own experience is different.” We should seek to understand the experiences of our fellow citizens–not to try and shut them up or shame them when they take a knee or speak out on an social evils of epidemic proportions.   You might be surprised to discover that the continuity of a long storied history of racial inequity is explained in part by city zoning, urban sprawl, the bull-dozing of housing projects, and the history of policing just to list a few factors (82). Chang is trying to foster understanding with his book and create another testament to the realities faced by marginalized people. Considering how dense Chang’s book is, it’s a fairly quick read, too. It is of critical importance to note how 2017 is a standout year because Americans are more concerned about issues of race now than they have been since the early 1990s!:

“Polls show that more Americans are concerned about race relations now than at any time since 1992, the year of the Los Angeles riots. The previous peak had come in 1965–the year of the Voting Rights Act, the Immigration and Nationality Act, the apex of the civil rights movement, the year of the last national consensus for racial justice.”

We have entered into another vicious cycle that Chang describes compassionately and poignantly:

Race makes itself known in crisis, in the singular event that captures a larger pattern of abuse and pain. We react to crisis with a flurry of words and, sometimes, actions. In turn, the reaction sparks its own backlash of outrage, justification, and denial. The cycle turns next toward exhaustion, complacency, and paralysis. And before long, we find ourselves back in crisis. . .One need not be a pessimist to see the bad loop of history we are caught within–crisis, reaction, backlash, complacency, crisis. There are fires. There are calls for action. There is then a bullying politics of fear. If most Americans recoil from the kind of excessive, gleeful, cynical bigotry someone like the billionaire Donald Trump proffers, they are yet demobilized to the point of denial (‘there is no problem’) or justification (‘there is a problem but I can’t solve it’). And then we find ourselves in another crisis.”

1.) This is an important book.

2.) Please read it and share it with someone else.