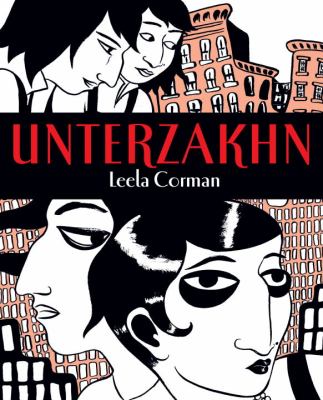 Unterzakhn (yiddish for ‘underthings’) by Leela Corman tells the story of Jewish twin sisters at the start of the 20th century in New York City.  Esther and Fanya’s stories are told in graphic novel form, spanning more than a decade from childhood through adulthood, with black and white illustrations reminiscent of Russian folk art. The sisters make decidedly different decisions in their lives, but they both chose career paths outside of community and family expectations of them and drift apart from one another (forcefully in one scene).

Fanya starts this story when she finds a woman bleeding in the street and is instructed to go find the “lady doctor”.  This encounter brings her to Bronia, a feminist obstetrician who performs illegal abortions, and convinces Fanya’s mother to let Bronia teach Fanya to read.  Fanya then begins to apprentice for Bronia, and adapts to the strident expectations of her teacher.  While her sister is learning to work as an obstetrician, Esther begins working at the local burlesque theater and brothel — running errands and cleaning up.  As she grows toward adulthood, her work changes and she loses her family in the process.

This is a quick, but in no way a light read.  The writing and the illustrations show a lot of darkness and pain.  The sisters always seem better when they’re together, showing the quick wit and love that seems to be reserved for each other. I had a difficult time putting this book down, because Corman made it easy to care about Fanya and Esther.  This is a good read for fans of David Small’s Stitches or anything by Charles Burns.

Bad Behavior has blocked 1311 access attempts in the last 7 days.