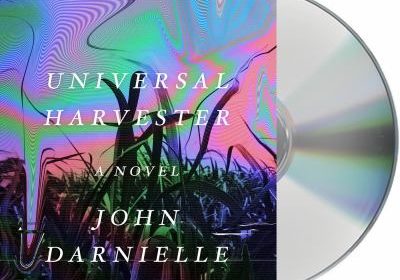 I just finished listening to John Darnielle read his book, Universal Harvester, on CD. I am left asking myself, “What just happened?” I liked it. I think I would like to re-read it, this time in print.

The book is about a young man named Jeremy Heldt who works at Video Hut in Nevada, Iowa in the mid-nineties. He is a down-to-earth guy, having lost his mother to a car accident six years prior. As a relatively responsible twentysomething adult, he isn’t sure what to do when he discovers that some videos have been returned with strange footage spliced into them. It is unclear to him whether the scenes are a goof, or if someone is getting hurt and sending out a cry for help. Also, his boss at the video store may or may not have become personally entangled in whatever it is.

I was first drawn to listen to this book because I read in a Booklist review that it is set in small-town Iowa. Not knowing anything about author John Darnielle, I thought, “I want to find out how he portrays an Iowan. I want to hear if he’s going to butcher the way we talk.”  I was admittedly skeptical that I wouldn’t find his portrayal of an Iowan to be silly, maybe a little bit insulting. Often it seems to me that nonnatives perceive us all to be rubes. Sometimes actors portray our manner of speaking in a way that more resembles a southern drawl than the intonation of an actual Iowan. I was pleased to find Darnielle’s main character sounding like some Iowans I know, albeit the ones who have also spent time living out west. This made more sense to me once I looked up a little more about Darnielle online and learned that he grew up in southern California and lived in Portland, Oregon briefly after high school. He did live in some of the Iowa towns where the events in Universal Harvester take place, though it is unclear when and how long.

My opinions of the writer/reader’s dialect aside, this book is a hard one to categorize. Some libraries in our system have classified it as fiction; others put it in the horror section. I am not usually a reader of horror books, and when I realized it was considered that, I thought “Uh oh. What am I getting myself into?” As I got further into the book, I kept bracing myself for something gory or horrifically disturbing. When I think horror, I think gore. However, there isn’t anything terribly gory in this book.

It turns out I was just as mistaken as the folks who think Iowans speak with a drawl. I came across this great article from The Horror Writers Association and learned that horror can take as many forms as the people who read it. After all, not everyone is horrified by the same things. I happen to find gore horrifying, some people are just as horrified by the unknown. Death is perhaps the biggest of the unknowns, but there are also a myriad of other unknowns throughout life.

There are many unknowns in Universal Harvester. If you like a plot that gets neatly tied up at the end, this book is not for you. However, if you appreciate great writing and a story well-told that makes you think and ask questions, then you should check this book out. It would be a great book club selection, because there is plenty here to explore and discuss. (In fact, if you know me, please read this book so we can talk about the details together! I’m still not sure what just happened.)

Next, I am going to check out some Mountain Goats CDs. The author of this book is in a band called the Mountain Goats, and he has been hailed as one of the best living lyricists. Judging by his novel writing ability, I’d say that’s likely a fair assessment. Happy reading and/or listening!