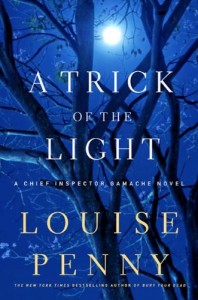 Mystery writer and four-time Agatha Award winner Louise Penny’s seventh book in the Inspector Armand Gamache series, A Trick of the Light, may just be her best yet.  The book follows the same quirky cast of characters who reside in the sleepy village of Three Pines near Montreal, Canada.  Artist and longtime resident Clara Morrow has just reached the pinnacle of her artistic career, a solo exhibition at the Modern Art Museum in Montreal.  The morning after the opening celebration, as Clara is relishing in her triumph, her closest childhood friend, Lillian Dyson, is found strangled in Clara’s serene garden and Clara quickly becomes the prime suspect.

Chief Inspector Armand Gamache, of the Surete du Quebec, and his team are called in to investigate the murder, which has become even more complicated as the Inspector is surrounded by the residents of Three Pines, many who have become friendly with him and his team over the years.  Gamache soon discovers that Clara and Lillian had become estranged after a falling out decades earlier, which moves the investigation in a new direction.  In addition to the murder of Lillian, the story gives the reader a glimpse into the competitive art world and the story is peppered with artists, art critics and museum curators.  Gamache soon learns the true nature of the art world, a place where the competition between enemies and friends can lead to murder.

New to Louise Penny’s mysteries?  Start with the first book in the series, Still Life, which is also a must read and introduces all the residents of Three Pines!

One thought on “Trick of the Light by Louise Penny”

Bad Behavior has blocked 1342 access attempts in the last 7 days.