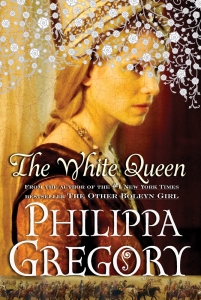 Full of lusty kings and beautiful ladies, political intrigue and devastating battles, Phillipa Gregory begins her next collection of historical fiction stories with the triumphant The White Queen. Following the generation before the Tudors (which Gregory brought to life in her popular The Other Boleyn Girl and others), The White Queen is the first in a series of three books and delivers exactly what Philippa Gregory fans expect: excellent writing, fast-paced stories, complex characters. As always, Gregory never forgets the human side of the stories; these are great men and women who will alter the course of history yet they are also just people, with very human faults and virtues.

With the bloody War of the Roses – where cousin was set against cousin – as a backdrop, The White Queen follows Elizabeth Woodville, a beautiful widow who catches the eye of Edward of York, the new King of England. Despite her being a commoner and from the rival Lancaster family, they marry and Elizabeth – and her family – rise to power and influence with the young king. There is no fairy tale ending though – men who once supported Edward now seek to overthrow him, more battles are fought and the country, already weary with war, is fighting again.

There are many mysteries and intrigues here including what became of Edward and Elizabeth’s oldest sons, the infamous “Princes in the Tower”, whose fate is still unknown today. Gregory takes us into this world, introduces us to its customs and makes us care. It is historical fiction at it’s best.

One thought on “The White Queen by Philippa Gregory”