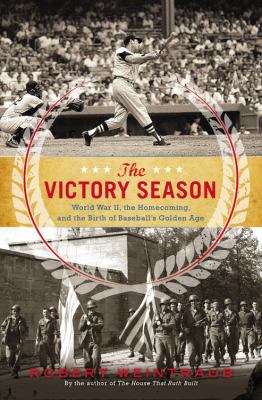 The Victory Season is the triumphant story of baseball and America after World War II.

In 1945 Major League Baseball had become a ghost of itself. Parks were half empty, the balls were made with fake rubber, and mediocre replacements roamed the fields, as hundreds of players, including the game’s biggest stars, were serving abroad, devoted to unconditional Allied victory in World War II. But by the spring of 1946, the country was ready to heal. The war was finally over, and as America’s fathers and brothers were coming home, so too were the sport’s greats. Ted Williams, Stan Musial, and Joe DiMaggio returned with bats blazing, making the season a true classic that ended in a thrilling seven-game World Series between the Boston Red Sox and the St. Louis Cardinals.

America also witnessed the beginning of a new era in baseball-it was a year of attendance records, the first year Yankee Stadium held night games, the last year the Green Monster wasn’t green, and, most significant, Jackie Robinson’s first year playing in the Brooklyn Dodgers’ system. The Victory Season brings to vivid life these years of baseball and war, including the little known “World Series” that servicemen played in a captured Hitler Youth stadium in the fall of 1945. Robert Weintraub’s extensive research and vibrant storytelling enliven the legendary season that embodies what we now think of as the game’s golden era. (description from publisher)

Bad Behavior has blocked 1849 access attempts in the last 7 days.