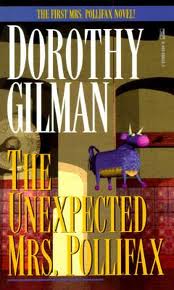 Dorothy Gilman’s series about a senior  spy begins with The Unexpected Mrs. Pollifax. The 60-something Emily Pollifax decides that she needs to do something more meaningful with her life, and begins by walking into the CIA to volunteer her services.

Published in 1966, some of the sentiments seem dated; women in their sixties today would be less likely to be have as their primary identity being a frail-looking grandmother who has never been part of the workforce. What is interesting is the Cold War attitudes and alliances. It’s one thing to set a book in the sixties, it’s another to read one written with those assumptions.

I decided to read this one after hearing Nancy Pearl’s recommendations on NPR; they were part of a list of books that featured travel. Mrs. Pollifax does get around; in this book she starts out in Mexico (acting as a courier), and ends up in Albania.  Along the way, she proves herself resourceful, tenacious and very, very tough – even by current standards. Her innocence leads her to trust others more easily than a professional spy would, but it allows her to develop relationships that will come in handy later. If you want to make a quick visit to a world gone by, and to meet a slightly eccentric but very successful spy, give these a try.

Bad Behavior has blocked 1316 access attempts in the last 7 days.