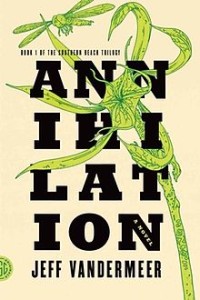 Area X. Engulfing an ill-defined swath of land, sea and sky in the southern U.S., it appeared suddenly, cutting off all connections – human, animal and otherwise – from the rest of the world. The government sends team after team – scientific and military – into Area X. Some disappear without a trace, others return badly damaged and still others return seemingly unharmed, only to die weeks or months later. Most communication and recording instruments are rendered useless once the border is crossed, the footage that does survive only deepens the mystery – and the growing horror – of Area X. Still, the agency that oversees each of these doomed expeditions – The Southern Reach – prepares a twelfth  expedition. 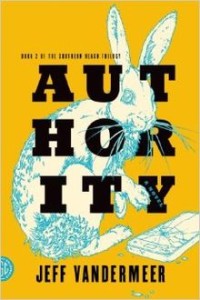 VanderMeer’s Southern Reach Trilogy opens with Annihilation (February 2014) as four women – an anthropologist, a surveyor, a psychologist and a biologist – are sent into Area X. Neither the author nor the narrator (the biologist) use names, instead the characters are defined only by their professions, lending a clinical and dispassionate air to the narrative. Even though we observe the others and Area X through the biologists’ eyes, even she remains somewhat removed from us and from her team. But instead of alienating the reader from the narrator, it lends an odd kind of intimacy that continues throughout the trilogy. The second book, Authority (May 2014) is told from the point of view of a man called only Control, who has been put in charge of The Southern Reach soon after end of the twelfth expedition –  and the investigation into its fate – as Area X appears to infiltrate (or contaminate, depending on your perspective) the world outside its borders. The third book, Acceptance (September 2014) returns us to Area X and the similarly inscrutable organization attempting to oversee, explain and control it. 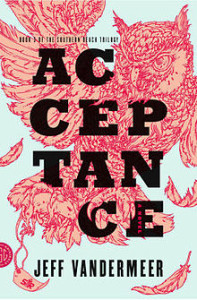 The language VanderMeer uses is  deeply atmospheric and complex, at times, maddeningly so*, although here in Area X it is entirely appropriate. Area X itself defies explanation and even description, as if our view of it through the eyes of our semi-anonymous characters was obscured, with unseen or unknowable dimensions hovering right at the edge of our perception. This dawning horror of the unknown creates and maintains a nearly intolerable level of suspense as layer after layer  is peeled back – at times reluctantly – exposing and obscuring Area X and the people drawn into its influence.

This series is one of those that you’ll want (or in my case, need) to read more than once and even then, it stays with you. It reminds me of Stephen King’s short story Crouch End, or anything by Lovecraft. Even the cover art on the paperback editions is worth studying – and then hiding safely away, lest Area X escapes.

* In the middle of reading Authority, I came across this word and had to share it. 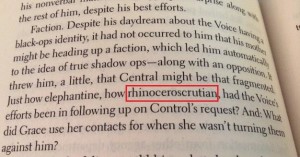 One thought on “The Southern Reach Trilogy by James VanderMeer”