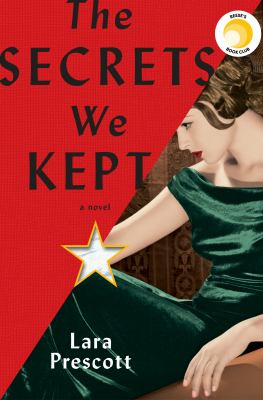 The Secrets We Kept by Lara Prescott  transports the reader back to the politics of the Cold War in the 1950s and the tensions between the United States and the Soviet Union during the years immediately following World War II.   At the heart of the story is the secret plan by the United States government to get its hands on Boris Pasternak’s masterpiece Doctor Zhivago in order to publish it for the world to read.

The Secrets We Kept is told in alternating chapters with scenes taking place between the United States and The Soviet Union.  Much of the story revolves around the pressure and repercussions on Pasternak of writing a book that is in direct contrast with the government of the USSR and their eventual censorship of his novel.  Pasternak’s struggle is not only with the government, it is also with his long time mistress, Olga Ivinskya, who became his most passionate advocate and sometime publicist.  Olga also has the distinction of being the inspiration for the main character in Pasternak’s novel, Lara.  The Soviet government went as far as imprisoning Olga for numerous years due to her association with Pasternak as an additional form of pressure on him.  Upon her release, she returned and they picked up where they left off with the goal of publishing Pasternak’s book.

Simultaneously, in Washington, D. C., new college graduate Irina is plucked from her secretarial position within the US government and given orders to go undercover to help smuggle a copy of the book out of the USSR.  Along with a few select others, she learns the ropes of becoming an international spy by transferring the manuscript of the book to its final destination.  Inspired by the United States belief that literature can change the world, the hand selected group of US spies assume identities all over the world to ensure the book has a worldwide audience.

When I discovered that this book was centered on the writing of Doctor Zhivago, I was immediately intrigued.  I knew just a little about the writing of the book and its aftermath, but this work of historical fiction is not only an intriguing read, but has me wanting to find out more about this time period and the men and women whose passion for literature brought the novel to a worldwide audience.

One thought on “The Secrets We Kept by Lara Prescott”

Bad Behavior has blocked 1347 access attempts in the last 7 days.