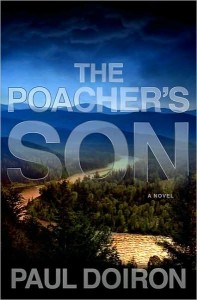 This is not the type of book I would typically choose.  Turns out, I couldn’t put it down.

When I go on vacation, I often look for books that take place in the same locale.  Since I was heading out on a vacation to Maine, this one fit the bill.  Granted,  it had also received several excellent reviews, so I wasn’t just going by the title or the picture on the cover, though I’ve  selected books that way a time or too, as well.  Popular authors such as Nelson DeMillie, Tess Gerritsen, John Lescroart and C.J. Box were all singing the praises of this debut novelist, whose day job just happens to be editing Down East: The Magazine of Maine.  Plus, the book also landed on Booklist’s best crime novels of 2010 list.

The Poacher’s Son opens with Mike Bowditch, a game warden in Maine, receiving an alarming message on his answering machine from his estranged father, Jack, whom he hasn’t seen in two years.  The next day, Mike discovers that his father is the prime suspect in the murders of a beloved cop and a lumber executive.  Though Mike knows his alcoholic father makes his living poaching illegal game, he cannot bring himself to believe that the man is capable of murder.

What distinguishes this book from more plot-based suspense thrillers is the realistic no-one-is-perfect characterizations.  Also, the author seems to have a natural knack for pulling the reader into the setting, be it the rocky coasts or the forested wilderness that makes up much of Maine.

No, I won’t tell you the ending.  But I will recommend that you read this book and that you keep a lookout for the series of other Mike Bowditch mysteries to come.