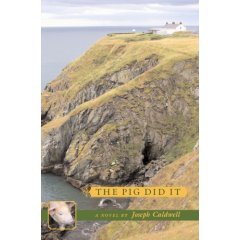 Looking for a fun summer read? Try The Pig Did It by Joseph Caldwell.

This hilarious tale takes place on the lovely Emerald Isle. The main character, creative writing teacher Aaron McCloud, travels to County Kerry, Ireland, to immerse himself in self-pity following an unrequited love. He stays with his Aunt Kitty who happens to be a very successful author herself. She specializes in re-writing or “correcting” old literary classics. (You really don’t want to know what she’s done with Oliver Twist).

On his first day there, Aaron’s bus encounters an overturned truck with pigs running amok. In an effort to impress the attractive swineherd, Lolly McKeever, Aaron attempts to catch one of them. Though unsuccessful, the pig decides he likes Aaron, and literally follows him home. Before they can return him to his rightful owner (even though Lolly won’t claim the animal belongs to her) the pig digs up Kitty’s garden, thereby revealing the skeleton of the missing Declan Tovey. Who killed him? Well, Aunt Kitty accuses Lolly of the crime, Lolly accuses Kieran Sweeney, and Aaron suspects his Aunt — thus beginning this comedy of errors. At times the main characters seem to be speaking in soliloquies, but I guess they’ve all just kissed the Blarney Stone a time or two. This is a quick read (less than 200 pages), an enjoyable romp, and the first part of a planned trilogy. Catch it while you can.